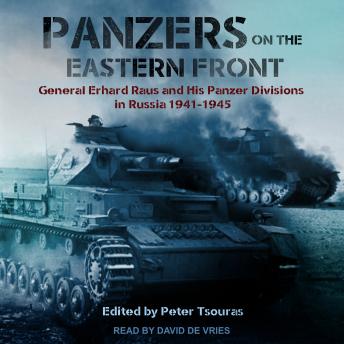 Panzers on the Eastern Front: General Erhard Raus and His Panzer Divisions in Russia 1941-1945

General Erhard Raus was one of the German Army's finest panzer generals and a leading exponent of blitzkrieg in the east. German panzers were witnesses to the incredible onslaught that was the first few months of Barbarossa, then the gradual strengthening of Russian resistance, counterattack and, ultimately, the long and drawn-out German retreat. Raus and his panzers were tested in every conceivable tactical situation and, inevitably, Raus became highly versed in all aspects of mobilized warfare.

This account by Erhard Raus, edited by leading Eastern Front expert Peter G. Tsouras, concentrates on German efforts to relieve Stalingrad. Raus, as commander of 6th Panzer Division, was in the thick of this bitter action, urging his panzers forward in a massive effort to break the Soviet stranglehold. These journals were originally written to brief the US Army at the height of the Cold War.

Panzers on the Eastern Front: General Erhard Raus and His Panzer Divisions in Russia 1941-1945