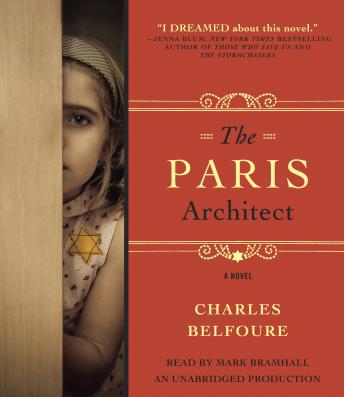 Like most gentiles in Nazi-occupied Paris, architect Lucien Bernard has little empathy for the Jews. So when a wealthy industrialist offers him a large sum of money to devise secret hiding places for Jews, Lucien struggles with the choice of risking his life for a cause he doesn't really believe in. Ultimately he can't resist the challenge and begins designing expertly concealed hiding spaces—behind a painting, within a column, or inside a drainpipe—detecting possibilities invisible to the average eye. But when one of his clever hiding spaces fails horribly and the immense suffering of Jews becomes incredibly personal, he can no longer deny reality.

Written by an expert whose knowledge imbues every word, this story becomes more gripping with every life the architect tries to save.

One of the best narrators I’ve heard. Great reminder of an awful time in history..

My heart was pounding, and the continued realization of the true historical facts makes this one of the best books of the year. I also thought the narrator one of the best. I recommend this book to everyone.

This was a great book. I enjoyed it very much.

Let's just say I'm not an audiobook person, I love the paper copy, but this was an awesome listen. The narrator did an excellent job with pronunciation, it was a mental trip down the streets of Paris during the occupation. Excellent job.

I loved this book and all the rich details provided about a horrific and historical time during World War II. Told from a Frenchman's perspective. As his life starts to intertwined with hated Jewish people in France and it's German occupiers. Very emotional intriguing and suspenseful novel. A must read especially for historical fiction fans. And the narrator is awesome!

To me this was a very attention keeping novel. I always have had an interest in Europe and the European people during the time of Hitler's Germany and WW2. This book takes place at that time in and around Paris. What makes this unique is that in this book the main character who is Lucien Bernard a French Architect is neither Jewish or German but becomes involved with both the Jewish people and the German Gestapo. Starting out it is all about Bernard's career. A very wealthy Frenchmen offers the architect the opportunity to design big buildings that should enhance his reputation as a world class French architect. First, however, he is asked to design for Monsieur Manet a place where he could hide his Jewish in his own apartment. Knowing the money would be exceptional and would bring on the possibilities of building the big agent man war factories he decides to do this. I will not spoil this story by continuing to share the plot but it becomes graphic, exciting, heartbreaking and heartwarming. You will be with the architect as he comes into a genuine man with love and compassion in his heart and life all while feeling the tragic life the Jewish faced.