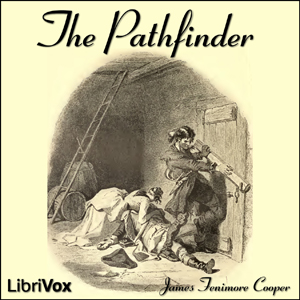 The Pathfinder - The Inland Sea

Natty Bumppo goes by many names: La Longue Carabine, Hawk Eye, Leatherstocking, and in this tale, The Pathfinder. Guide, scout, hunter, and when put to it, soldier, he also fills a lot of roles in pre-Revolution upstate New York. An old friend, Sergeant Dunham of the 55th Regiment of Foot, asks him to guide his daughter through the wilderness to the fort at Oswego where Dunham serves. With the French engaging native Indian allies against the British and the Yankee colonists, such a journey is far from safe.

Dunham has a plan in mind - to see his daughter Mable married off to the most redoubtable frontiersman and marksman in the territory, who is Pathfinder himself. But as an attractive and marriageable young lady, she draws other suitors. Then a military expedition contrives to put Sgt. Dunham, Mable, Pathfinder, and two other wooers into an isolated and dangerous garrison. Here treachery raises the stakes, and with the soldiers of the detachment shot down or captured, all of them must show mettle for any of them to escape with their scalps.

This title is due for release on August 26, 2016
We'll send you an email as soon as it is available!