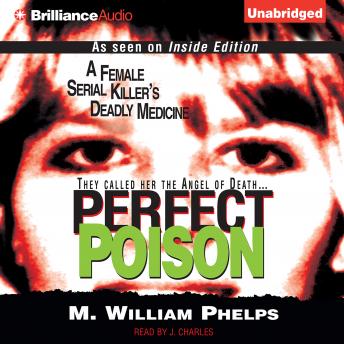 
In Northampton, Massachusetts, at the Veterans Affairs Medical Center, Kristen Gilbert was known as a hardworking, dedicated nurse—so why were her patients dying? So many emergencies and sudden deaths occurred while Kristen made her rounds on Ward C that her colleagues jokingly called her the “Angel of Death.” Yet most people didn’t suspect the horrifying truth behind the nickname: that Gilbert’s polished façade concealed a scheming, manipulative liar and homicidal, narcissistic sociopath.

From August 1995 through February 1996, Gilbert dealt out wholesale death. Her victims were helpless patients who trusted her as a caregiver, only to learn too late that she was a killer, her weapon a drug capable of causing fatal heart attacks. But she got away with murder until three of her fellow nurses could no longer ignore the proliferation of deadly “coincidences” on Gilbert’s watch. Investigators believe Kristen Gilbert may have been responsible for as many as 40 deaths. As the law closed in, she struck back, faking suicide attempts, harassing witnesses, stalking her ex-boyfriend, and terrorizing the hospital with bomb threats. In March 2001, after being found guilty of four counts of murder and two counts of attempted murder, Angel of Death Kristen Gilbert was sentenced to life imprisonment.

This title is due for release on January 29, 2008
We'll send you an email as soon as it is available!