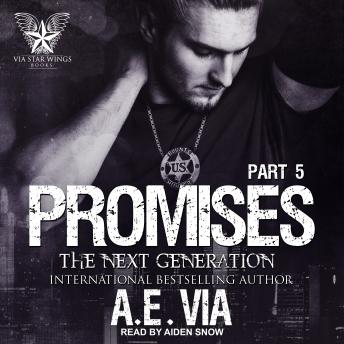 Promises: Part 5: The Next Generation

Duke Webb has run the most successful bail recovery agency in Atlanta for over twenty years. That's because he has a team of trained, competent hunters backing him up to keep his name feared on the streets. But Duke knows that nothing can go on forever. That's what leads him to start his new training program.

Kellam Knight has studied martial arts under his sensei, Quick, since he was eight years old. A tossed-out reject from high-society, Kell has a problem fighting on the right side of the law. When Quick offers Kell the opportunity to join Duke's training program, he's all in. Except he's not prepared for the straight, over-confident, extremely disciplined, sexy man Brian has recruited to be his partner.

Tyrell Jenkins' world was flipped upside down when his father never returned home from his last deployment. He'd been Ty's teacher, mentor, his guide to living a righteous life as a good man. When Brian King-his father's most trusted comrade-finally comes to him with the truth, he doesn't come alone. He comes with trained men hidden in the shadows . . . and a once-in-a-lifetime opportunity to join a brotherhood unlike any other.

Promises: Part 5: The Next Generation