The Race to Save the Romanovs: The Truth Behind the Secret Plans to Rescue the Russian Imperial Family 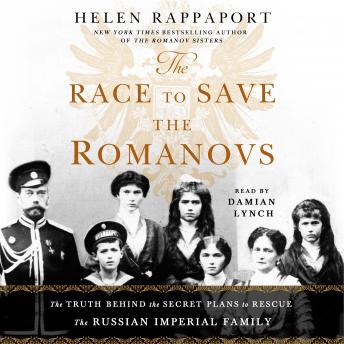 On the 100th Anniversary of the murder of the Russian Imperial Family, acclaimed historian Helen Rappaport embarks on a quest to uncover the many international plots to save them, why they failed, and who was responsible.
The murder of the Romanov family in July 1918 horrified the world and its aftershocks still reverberate today. In Putin's autocratic Russia, the Revolution itself is considered a crime and its anniversary was largely ignored. In stark contrast, the centenary of the massacre of the Imperial Family was commemorated in 2018 by a huge ceremony to be attended by the Patriarch of the Russian Orthodox Church.
While the murder itself has received major attention, what has never been investigated in detail are the various plots behind the scenes to save the family-on the part of their royal relatives, other governments, and Russian monarchists loyal to the Tsar. Rappaport refutes the claim that the fault lies entirely with King George V, as has been the traditional claim for the last century. The responsibility for failing the Romanovs must be equally shared. The question of asylum for the Tsar and his family was an extremely complicated issue that presented enormous political, logistical and geographical challenges at a time when Europe was still at war.
Like a modern day detective, Helen Rappaport draws on new and never-before-seen sources from archives in the US, Russia, Spain and the UK, creating a powerful account of near misses and close calls with a heartbreaking conclusion. With its up-to-the-minute research, The Race to Save the Romanovs is sure to replace outdated classics as the final word on the fate of the Romanovs.
Praise for The Race to Save the Romanovs:
'Rappaport, a historian, turns the question of why European relatives and Allied governments failed to save Czar Nicholas and family into a thriller, full of juicy tidbits for Romanov completists.' - Newsweek
'Devastating, complex, and fast-moving...This is a well-researched account of a colorful, suspenseful, and tragic series of events.' - Publishers Weekly

Race to Save the Romanovs: The Truth Behind the Secret Plans to Rescue the Russian Imperial Family