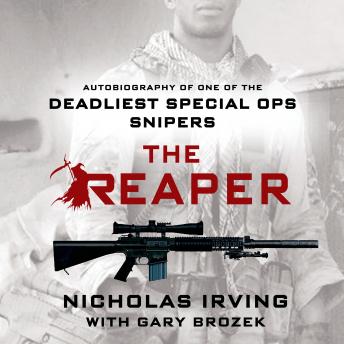 The Reaper: Autobiography of One of the Deadliest Special Ops Snipers

Groundbreaking, thrilling and revealing, The Reaper is the astonishing memoir of Special Operations Direct Action Sniper Nicholas Irving, the 3rd Ranger Battalion's deadliest sniper with 33 confirmed kills, though his remarkable career total, including probables, is unknown.

Irving shares the true story of his extraordinary military career, including his deployment to Afghanistan in the summer of 2009, when he set another record, this time for enemy kills on a single deployment. His teammates and chain of command labeled him 'The Reaper,' and his actions on the battlefield became the stuff of legend, culminating in an extraordinary face-off against an enemy sniper known simply as The Chechnian.

Irving's astonishing first-person account of his development into an expert assassin offers a fascinating and extremely rare view of special operations combat missions through the eyes of a Ranger sniper during the Global War on Terrorism. From the brotherhood and sacrifice of teammates in battle to the cold reality of taking a life to protect another, no other book dives so deep inside the life of an Army sniper on point.

No spoiler here. I loved the book. Knowing what I know, I would still buy it. This is an easy read for everyone jumping into non-fiction military. However, 4 of 5 is what I feel it deserves. Why? Understanding OPSEC and giving out secrets is never a good thing, I would think that the mistakes in the book would have been caught and either avoided or not made. There are some TO&E mistakes. Nomenclature mistakes, and some pretty glaring inconsistencies in some of the timelines that someone paying attention will catch. Which hit the credibility a bit. However, the flow and the continuity of the story line, and the style in which it was written, made taking the journey with the writer, very compelling. I could feel many of the scenes, as if I was there. Quality writing, for sure. I would recommend this book to anyone considering joining the military and especially joining the Rangers. Worthy read, 100%! Thank you for your service. Salute.

Great listen from a great author!!

Great POV from a very down to earth man.

Awesome book about a truly awesome man/ hero!!! God Bless him and my fellow brothers and sisters at arms !

Excellent book. I enjoy history books and this is definitely towards the top of my list of good ones.

Great book. Easy listen. Makes you proud to be an American and blessed to have the greatest armed forces in the world

This title is due for release on January 27, 2015
We'll send you an email as soon as it is available!