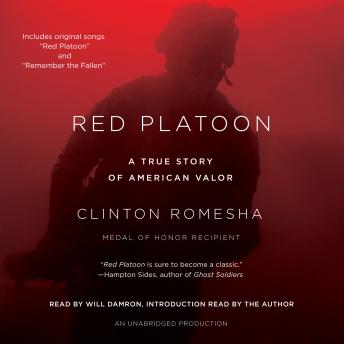 The only comprehensive, firsthand account of the thirteen hour firefight at the Battle of Keating by Medal of Honor recipient Clinton Romesha, for readers of Black Hawk Down by Mark Bowden and Lone Survivor by Marcus Luttrell

''It doesn't get better.' To us, that phrase nailed one of the essential truths, maybe even the essential truth, about being stuck at an outpost whose strategic and tactical vulnerabilities were so glaringly obvious to every soldier who had ever set foot in that place that the name itself -- Keating -- had become a kind of backhanded joke.'

In 2009, Clinton Romesha of Red Platoon and the rest of the Black Knight Troop were preparing to shut down Command Outpost Keating, the most remote and inaccessible in a string of bases built by the U.S. military in Nuristan and Kunar in the hope of preventing Taliban insurgents from moving freely back and forth between Afghanistan and Pakistan. Three years after its construction, the army was finally ready to concede what the men on the ground had known immediately: it was simply too isolated and too dangerous to defend.

On October 3, 2009, after years of constant smaller attacks, the Taliban finally decided to throw everything they had at Keating. The ensuing 14-hour battle-- and eventual victory-- cost 8 men their lives.

Red Platoon is the riveting first-hand account of the Battle of Keating, told by Romesha, who spearheaded both the defense of the outpost and the counter-attack that drove the Taliban back beyond the wire, and received the Medal of Honor for his actions.

Very good book. Stunning! I would really recommend this book if you like books, such as Black hawk down and 13hours in Benghazi. Have not had such a good read since Bravo 2.0.

This is an outstanding story of true patriotic heroism. Very gripping.

Very well written and an amazing story. Absolutely amazing how soldiers react when put in life or death decisions.

I haven’t been this spellbound, riveted-to, mesmerized and not wanting to stop listening to or read a book in over 30 years! Whenever I think I have it rough or want to wallow in a self-pity party, I will remind myself of what these men endured and sacrificed in order to defend and protect our personal freedoms here in the USA! Thank you Clinton Romesha, and all the members of Red, Blue, & White Platoons!

The story was absolutely amazing. The best first hand war story I’ve ever heard or read. Reminded me of my time in country. The narrator was very good.

In order to fully appreciate our freedoms, we can choose to walk in our militaries shoes and experience the challenges they have lived -- by listening to their stories. Freedom is not free and their sacrifice is spelled out in this book. Do not be surprised if you are spell bound, encouraged, challenged personally. It is always rewarding to learn from those who would lay down their life for their country, and their brothers. Great read.

greatest book ever. the way it's told will get you hooked and you won't stop listening/reading.

As good, if not better than "Lone Survivor". This is one of the best books I have read in a long time.

The book and story are very good. The reader is also pretty darn good.

Fantastic first-person account of the final fight for COP Keating in the Hindu Kush of Afghanistan. SSG Romesha may be a man of few words, but he picked the perfect person to help him put his story to paper. As far as the story itself, unforgettable. "The Outpost" is a decent history of the post and a terrific accompaniment, but it cannot match the immediacy and emotion of "Red Platoon." May the fallen rest; may the living live to the fullest in their honor. There are horror shows and there are self-induced horror shows. This one is truly harrowing. You will not be able to shut it off. Romesha kicks it off and wraps it up. The narrator handles the rest very well. .

It's an excellent book. Captivating and intriguing.

An amazing account of a true group of heroes. I highly recommend this fast paced, well written true story. And if any members of Black Knight read this review I want to say thank you for laying it all on the line for the red, white and blue.