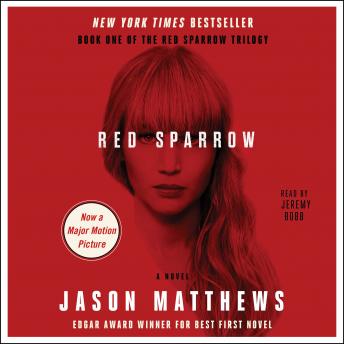 In contemporary Russia, state intelligence officer Dominika Egorova has been drafted to become a “Sparrow”—a spy trained in the art of seduction to elicit information from their marks. She’s been assigned to Nathaniel Nash, a CIA officer who handles the organization’s most sensitive penetration of Russian intelligence. The two young intelligence officers, trained in their respective spy schools, collide in a charged atmosphere of tradecraft, deception and, inevitably, a forbidden spiral of carnal attraction that threatens their careers and the security of America’s valuable mole in Moscow.

For fans of John le Carré and Ian Fleming and featuring “high-level espionage, pulse-pounding danger, sex, double agents, and double crosses” (Nelson DeMille), Red Sparrow is a timely and electrifying thriller that is impossible to put down.

A good "listen" and an excellent first book. Let's hope there is more to the story.

compelling read! the narrator did a great job. not boring, not too fast. feels like I was watching a movie

Very captivating, the banter & recipes were a fantastic addition to the suspense. The narrator got better as the book went on.

A carefully crafted piece of work

Besides being a good read, "Red Sparrow" was a clear example of people being pieces in a chess game. I am off to get the next book in the series.

A suspenseful book and the narrator was good. Long book though. It's a commitment!

loved! could not stop listening

Awesome book. Listened to it on my way back and forth to work. Makes traffic less stressful. Movie did not do justice.

Engaging, well written, intense and compelling fiction. The author has a great sense of how to describe people and places that really bring the scenes to life. Had a hard time pausing this one cause I always wanted to know what was going to happen next

They story was good,but a little slow moving. The author's obsession with food annoyed me so I won't be reading anything else by this author.

A great book to listen to, left me wanting more. Hope there’s a next book.

I liked the story but I found the recipes narrated between chapters to be distracting and pointless and hated sitting through them to get back to the story.

I found myself going for extra drives so I could keep listening!

Great job Jason, loved the recipes between chapters. One of my favorites this year. Thank you. Mike Cook..

Clearly written by a man, with all the references to bosoms and curves, which became a little exhausting but otherwise quite thrilling and a great spy story!

Can’t wait for the next book in the series to come out.

It was another good listen.

I generally like to listen to anything set in Russia. This book is very good. I enjoyed learning about the recipes that followed each chapter. Maybe I will look for the hard copy someday. I wonder if the author is going for a second book following the main characters and more about food.

Exceptional read. Hard to put down. An intriguing look at probable Russian politics and international espionage.

Great modern spy novel. Really enjoyed it. Looking forward to next one in series.

Fantastic Novel !!! I hope there will be more to come. A great read for Spy Craft fans!

Great read. Can only hope we visit agent Nash