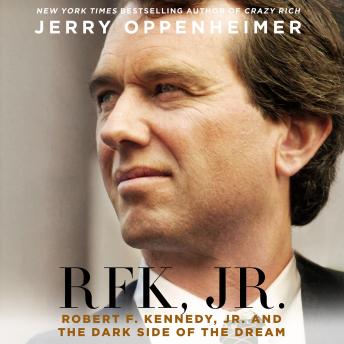 RFK Jr.: Robert F. Kennedy Jr. and the Dark Side of the Dream

From New York Times bestselling author Jerry Oppenheimer comes a sensational biography of the son of the legendary Senator and troubled standard bearer of America's most fabled political dynasty.
Robert F. Kennedy Jr. inherited his assassinated father's piercing blue eyes and Brahmin style, earning a reputation as the nation's foremost environmental activist and lawyer - the 'toxic avenger' - battling corporate polluters. But in this, the most revelatory portrait ever of a Kennedy, Oppenheimer places Bobby Jr., leader of the third generation of America's royal family, under a journalistic microscope.
Based on scores of exclusive, candid on-the-record interviews, public and private records, and correspondence, Jerry Oppenheimer paints a balanced, objective portrait of this virtually unaccounted-for scion of the Kennedy dynasty. Like his slain father, the iconic senator and presidential hopeful, RFK Jr. was destined for political greatness. Why it never happened is revealed in this first-ever biography of him.

This title is due for release on September 22, 2015
We'll send you an email as soon as it is available!