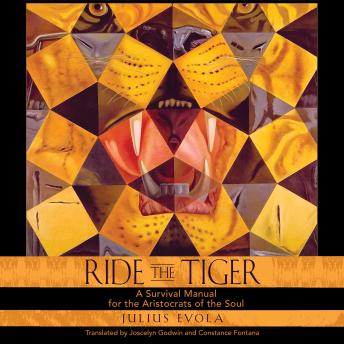 Ride the Tiger: A Survival Manual for the Aristocrats of the Soul

Julius Evola’s final major work, which examines the prototype of the human being who can give absolute meaning to his or her life in a world of dissolution

• Presents a powerful criticism of the idols, structures, theories, and illusions of our modern age

• Reveals how to transform destructive processes into inner liberation

The organizations and institutions that, in a traditional civilization and society, would have allowed an individual to realize himself completely, to defend the principal values he recognizes as his own, and to structure his life in a clear and unambiguous way, no longer exist in the contemporary world. Everything that has come to predominate in the modern world is the direct antithesis of the world of Tradition, in which a society is ruled by principles that transcend the merely human and transitory.

Ride the Tiger presents an implacable criticism of the idols, structures, theories, and illusions of our dissolute age examined in the light of the inner teachings of indestructible Tradition. Evola identifies the type of human capable of “riding the tiger,” who may transform destructive processes into inner liberation. He offers hope for those who wish to reembrace Traditionalism.