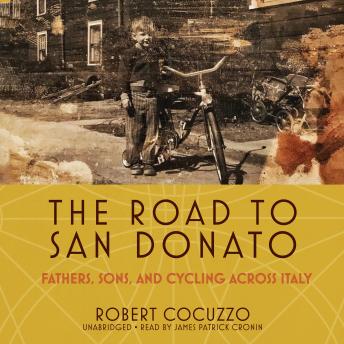 The Road to San Donato: Fathers, Sons, and Cycling across Italy

The Road to San Donato is an adventurous and nostalgic bicycling memoir of an American father and son tracing their Italian heritage. Riding rental bikes and carrying a bare minimum of supplies, Rob Cocuzzo and his sixty-four-year-old father, Stephen, embark on a 425-mile ride from Florence to San Donato Val di Comino, an ancient village in the mountains outside of Rome from which the Cocuzzo family emigrated a hundred years earlier.

Prompted by Rob’s ailing grandfather, who regrets having never visited his home village, the two cyclists pledge to make the trip in the old man’s honor. Despite an expired passport, getting lost, some near misses, and other misadventures, the father and son finally reach the quirky village of San Donato. For Italian Jews in the 1940s, the road to San Donato was one of exile, and many of the people in the village banded together to protect nearly a hundred Jews. While meeting his many new “cousins,” Rob attempts to unlock this history and glean what role his family played at the time—resistors or collaborators? The Road to San Donato is a generational story that many Americans share and a travel adventure not to be missed.