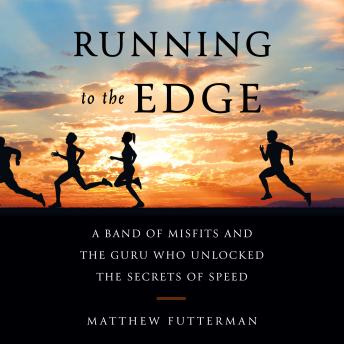 The Running to the Edge: A Band of Misfits and the Guru Who Unlocked the Secrets of Speed

'Gripping . . . the narrative is smooth and immediate, almost effortless in its detail, if occasionally breathless, like a good fast run . . .' --The New York Times Book Review

Visionary American running coach Bob Larsen assembled a mismatched team of elite California runners . . . the start of his decades-long quest for championships, Olympic glory, and pursuit of 'the epic run.'

In the dusty hills above San Diego, Bob Larsen became America's greatest running coach. Starting with a ragtag group of high school cross country and track runners, Larsen set out on a decades-long quest to find the secret of running impossibly fast, for longer distances than anyone thought possible. Himself a former farm boy who fell into his track career by accident, Larsen worked through coaching high school, junior college, and college, coaxing talented runners away from more traditional sports as the running craze was in its infancy in the 60's and 70's. On the arid trails and windy roads of California, Larsen relentlessly sought the 'secret sauce' of speed and endurance that would catapult American running onto the national stage.
Running to the Edge is a riveting account of Larsen's journey, and his quest to discover the unorthodox training secrets that would lead American runners (elite and recreational) to breakthroughs never imagined. New York Times Deputy Sports Editor Matthew Futterman interweaves the dramatic stories of Larsen's runners with a fascinating discourse of the science behind human running, as well as a personal running narrative that follows Futterman's own checkered love-affair with the sport. The result is a narrative that will speak to every runner, a story of Larsen's triumphs--from high school cross-country meets to the founding of the cult-favorite 70's running group, the Jamul Toads, from national championships to his long tenure as head coach at UCLA, and from the secret training regimen of world champion athletes like Larsen's protégé, American Meb Keflezighi, to victories at the New York and Boston Marathons as well as the Olympics. Running to the Edge is a page-turner . . . a relentless crusade to run faster, farther.