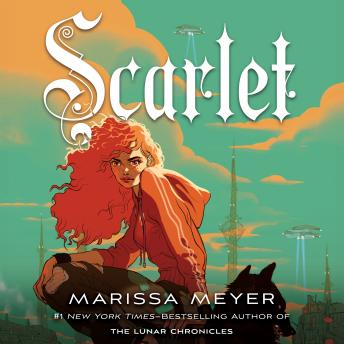 #2 of The Lunar Chronicles

For Marissa Meyer's second installment of the bestselling Lunar Chronicles, she imagines Little Red Riding Hood set in the distant future. And yes, there is a big, bad Wolf.

Cinder, the cyborg mechanic, returns. She's trying to break out of prison--even though if she succeeds, she'll be the Commonwealth's most wanted fugitive.

Halfway around the world, Scarlet Benoit's grandmother is missing. It turns out there are many things Scarlet doesn't know about her grandmother or the grave danger she has lived in her whole life. When Scarlet encounters Wolf, a street fighter who may have information as to her grandmother's whereabouts, she is loath to trust this stranger, but is inexplicably drawn to him, and he to her. As Scarlet and Wolf unravel one mystery, they encounter another when they meet Cinder. Now, all of them must stay one step ahead of the vicious Lunar Queen Levana, who will do anything for the handsome Prince Kai to become her husband, her king, her prisoner.

I never want this series to end... dear God I'm gonna bawl like a baby!!

I've finished Scarlet by Marissa Meyer and I feel like the story has only just begun. She does that to me every time. Good characters with a fast paced plot--especially with this tale--and when you're ready for some meat, the story continues in the next book. Such a tease.

love these books so far, I like the twist and find that I can't wait to see what happens next.

Great book..keeps u going definitely..can’t wait to see what happens next! Great narrator.

I can't wait to get the next one! I may have to buy an extra credit for it. Love it

Really like the narrator! Interesting series set in a different kind of world.

This has been a great series so far. Very entertaining

Loved!!! Narrator was great and I couldn't wait to listen to the next one in the series!

Love this book my favorite out the The Lunar Chronicles, must read!

I really appreciated how the narrator used distinctively different voices for each different character. It was very helpful and engaging!

Such a great continuation of the last book, Scarlet and Wolf have to be one of my favorite dips of all time. The narrator did an amazing job, she was so easy to listen to, though her French accent was a bit off, it was great none the less! Amazing work, I can’t wait to listen to the rest!

Narrator almost ruined this book for me. She did the worst French accent ever.