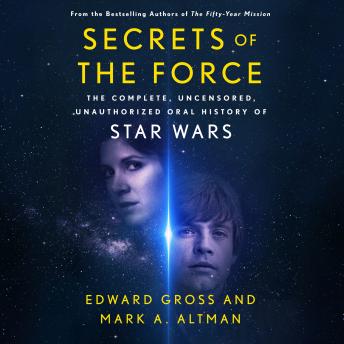 Secrets of the Force: The Complete, Uncensored, Unauthorized Oral History of Star Wars

This program includes an introduction read by Mark A. Altman

From the authors of The Fifty-Year Mission and So Say We All, comes the first and only comprehensive oral history of the Star Wars movie franchise.

For the past four decades, no film saga has touched the world in the way that Star Wars has, capturing the imaginations of filmgoers and filmmakers alike. Now, for the first time ever, Edward Gross and Mark A. Altman, the bestselling authors of The Fifty-Year Mission, are telling the entire story of this blockbuster franchise from the very beginning in a single exhaustive volume. Featuring the commentaries of hundreds of actors and filmmakers involved with and impacted by Star Wars, as well as writers, commentators, critics, executives, authors, film historians, toy experts and many more, Secrets of the Force, will reveal all in Altman and Gross’s critically acclaimed oral history format from the birth of the original film through the latest sequels and the new televisions series.

Secrets of the Force: The Complete, Uncensored, Unauthorized Oral History of Star Wars

by Mark A. Altman, Edward Gross