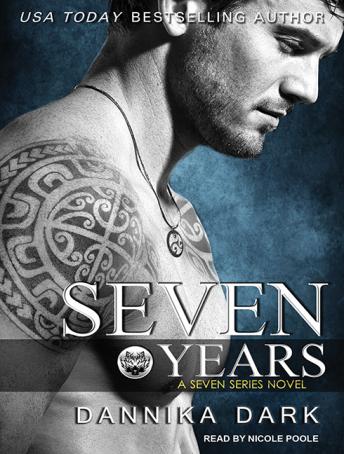 It's been seven years since Lexi Knight lost her brother in a tragic accident. On the anniversary of his death, her brother's best friend shows up unexpectedly-a man she hasn't seen since the funeral. He is no longer the boy Lexi once knew, but a dangerous-looking man with tattoos and dark secrets. He broke her trust and abandoned her family, yet what he reveals makes it impossible to stay angry. Lexi has been secretly infatuated with Austin since childhood, so finding out he's a Shifter just makes him sexier. Dammit.

Austin Cole has returned to the city where he grew up, and just in time. He's lived a hard life these past seven years, and the shadows of his past are threatening to destroy Lexi's family. It's time that she learned the truth about her brother, but there is a shocking twist that Austin never saw coming. Now he must protect her family when her mother and sister wind up in mortal danger. Will Lexi learn to accept the truth about who he is, and can Austin salvage a relationship from the ruins of their past?

If you are looking for a great paranormal romance book that is sexy, smart and exciting- then this author will rock your world. Easy to read, easy to love. No regrets. Frankly, I kind of envy people who haven’t read this series yet, because they get to read it for the first time. Enjoy!

I really liked this book! Great narrator with clear character voices. This is a intriguing paranormal story with a sassy, cheeky edge. The female lead is strong, fun and sharp, and the writing is snappy. I’m keen to read the whole series.

A very enjoyable story! Love the playful banter and how sarcasm is how Lexi responds a lot of the time--but not in a cynical way, funny (was very relatable).

Really liked this book, I skipped over it quite a lot but glad I gave it a chance. Only problem the narrator screeching and screaming all the time (and a lot was not necessary. Yes some were her trying to convey emotion in the story done badly but a lot was not needed and I struggled to continue to listen to the book because of it), I had to keep turning the volume up/down to try and hear parts then you’d get a screech out of no where. Yes her voice changes for each character was good (apart from all the female voices) so you knew who was speaking but I won’t be listening to the rest of the books if she is the narrator for them I just can’t do it

fell in love with these characters and their stories.. all the push and pull of a really good story.

I love this book! Very captivating right from the start and has the “will they/will they not” tension for a good portion of the book. I love Dannika Darks books and love how well Nicole Pool brings these characters to life.

Not what I expected but still a good read

Oh how I liked this! I loved Lexi’s fierce loyalty and capacity for love. And funny humor. Austin was a man in a boy’s body when he was younger and the seven years were the life experienced he needed for continued growth for life’s challenges. Dannika Dark always writes well defined characters and plots. Nicole Poole executed the narration as the master she is.

I thought this book was a great book.

A sweet hallmark type of supernatural story which I enjoyed. I loved the simple joy, laughter and intense connection between Lexi and Austin. Nicole Poole is also an awesome narrator!

Best series I have read since BDB

Realy good book . One of my favorite authors and favorite narrator have read and listen many times to this series

These are shifters, I expected a little more blood and violence. This is not an action packed story. I liked this book, really enjoyed it. The author created great characters. Like I could hang out with them. This has one of the funniest sex scenes I have EVER read! I giggled. I recommend as a light read.

This is a great book!!

It was a great book!

I liked it. different from other shifter books, but it was good. woulda been better w dual narrators.

I absolutely love this series.

I found it difficult to enjoy this book around the middle because the love interest doesn’t act much better than the jerks who are trying to control and manipulate Lexie… and she just goes along with it! She doesn’t insist that he explain important things like what being in heat means, she allows everyone else to reveal things when they want to, only occasionally staging a fit of stubbornness. If you like empowered female characters and men who respect them, and character development, steer away from this one, it will probably drive you crazy as it did me. But if you’re cool with the whole strong-hero-saves-damsel-in-distress thing then you’ll probably really enjoy this as there is a lot of other stuff to like about it, such as enjoyable world building.

the storyline was fun and I enjoyed the action in the story. Narrator was good!

Absolutely enjoyed this book, the story, the mystery around shifters and characters, the love scenes could have been more but all in all very entertaining. Look forward to book #2 in this series.

I'll look for more by this author

This is such a DELIGHTFUL uplifting book. The narrator paints detailed scenes that are so easy to imagine that you nearly feel like you are there. The characters are warm and the narrator foes an EXCELLENT job ot portraying each. Romantic and cheerful book.

This book is a great mix of romance, mystery,suspense and steam. I loved listening to it and can't wait to listen to the next one.

Not my cup of tea generally, but I stuck with it and was pleasantly surprised. Great narrator and a natural language feel. A little pat at the end, but I recommend it.

What a terrific read! Nicole Poole is a superb narrator! Wish all narrators were as good as she is!

Great base book for the series

Love this author and narrator. The stories are amazing and can’t wait to listen to them all.

Amazing good. Didn’t think I’ll like it because it starts off slow but once you get into the story more it’s amazing. I couldn’t stop listening.

Overall I am a fan. It can get a bit cheesy and predictable but I still liked it. It was not boring and the characters are likeable. I'm reading book 2

Not my favourite. I found the main female character very weak and repeatedly relying on the male characters to save her time and again (with the contradictory time she saves herself against three werewolf men though she can’t seem to save herself against one human man). Found the story and the characters very naive. Very old fashioned views. No big twists or turns. If your looking for raunchy sex scenes though, this is your book.

Not my cup of tea at all.

I loved this book. Narrator was fantastic

1st time listening/ reading from this author and I’m a fan.

I really enjoyed this book. It is not something I would typically choose ; but I really got into it.

Cant wait to read the next book!

loved this book. I'm not a big sci-fi person so this is perfect. just a little freaky stuff but very believable and written in a way you can actually see it in your mind. i fell in love with everyone, great book, I need a sequel!!

I dont know which I liked most. The narration, the suspense or the relief I got from the happy ending. I read with anticipation and hope for the protagonist. At a point, all I could say was: please tell me this woman overcomes this terrible ordeal. Talking to no one in particular. I dont think I have a read any other book in which murder is anticipated and celebrated. For once, evil must not always prevail. Let me talk about what I take away from Behind Closed Doors. A psychopath is very brilliant and deceitful. Down's syndrome doesnt make you dumb at all! Not even the slightest. Patience is a virtue that will yield success if well harnessed. Forgive my grammar. The reviews made me pick this one and it was worth it.

I'm just so bored. The whole book is essentially a guy who obviously, blatantly, is into our lead girl. But because he doesn't outright say "I like you" she acts like it's impossible he's into her - despite the ridiculous boyfriend/saviour/protector/oral-stimulator situations, they get into. For well over 3/4 of the book. On and on and on. Oh, and lots of wolves pissing everywhere. I tried to struggle on just to finish but I just can't be bothered.

I liked this book. Wasn't slow at the beginning.

This was a great easy and exciting read! I've enjoyed it and order the next book!

A few cheesy moments, but overall this was fabulous! If you can get over some of the "oh, please..." portions of romance books, then don't pass this up! Nicole Poole did such a great job narrating. Her character voices were performed very well. I loved how Dannika didn't leave random details out. She really built out her characters, and that's something I am very particular on.

When Lexy screams out because she's in panic about her family....yeah! That was a turning point for that character for me. Nicole Poole and the rest of the cast do a great job of telling the story.

I'm going back to the beginning of the series to read again because, like when I was a kid, I sped through all the books fast and kinda, well, skipped a little of each book to get to the end. So I am going back to read again so that I can get all of the nuances. Can hardly wait for the last 2 books.