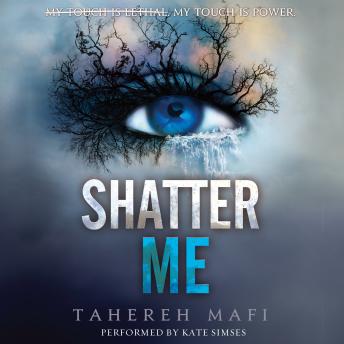 No one knows why Juliette has such incredible power. It feels like a curse, a burden that one person alone could never bear. But The Reestablishment sees it as a gift, sees her as an opportunity. An opportunity for a deadly weapon.

Juliette has never fought for herself before. But when she’s reunited with the one person who ever cared about her, she finds a strength she never knew she had.

And don’t miss Defy Me, the shocking fifth book in the Shatter Me series!

I just started this book, its got my attention and the narrator is good how ever the swiping sound is driving me nuts lol.

How creative the way of putting words to the thoughts of a girl in a lonely space and long time. I loved it

I've read the book so I understand what it's about and it took a couple times to realize how simple this book is. The main character's voice is exactly how I imagined it when I read it.

I hated it! The only reason why I finished it was because I paid for the credit.

This book is not hard to understand at all. I loved this book and the rest of the series that followed. It was extremely well developed.

This book makes no sense. I'm confused, what is it about. Is she the only one with power. What happen to earth? This book doesn't give you important background information. It's a dumb book. Don't brother.

So bad, this story is painfully to listen to. The main character is so whiny.

Best YA adult book I have read in forever! Couldn't stop listening to it, and I can't wait for the sequel! Narration was excellent, though it would have been nice to have greater differnces in the voices.

This title is due for release on November 15, 2011
We'll send you an email as soon as it is available!