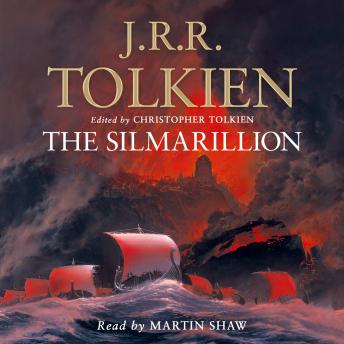 The forerunner to The Lord of the Rings, The Silmarillion tells the earlier history of Middle-earth, recounting the events of the First and Second Ages, and introducing some of the key characters, such as Galadriel, Elrond, Elendil and the Dark Lord, Sauron.

The tales of The Silmarillion are set in an age when Morgoth, the first Dark Lord, dwelt in Middle-Earth, and the High Elves made war upon him for the recovery of the Silmarils, the jewels containing the pure light of Valinor.


Included in the book are several shorter works. The Ainulindale is a myth of the Creation and in the Valaquenta the nature and powers of each of the gods is described. The Akallabeth recounts the downfall of the great island kingdom of Númenor at the end of the Second Age and Of the Rings of Power tells of the great events at the end of the Third Age, as narrated in The Lord of the Rings.

I love this book. I have read it several times, but hearing it added a whole new layer and allowed me to take notes. Will definitely listen again

Love this book, Love hearing the pronouceation of the words

If you are a Lord of the Rings Lover like me then you owe it to yourself to go back to the very beginning of Tolkien's world and learn the origins of the heroes we love. This is that Book. Excellent Read!

One of the best Books I’ve ever read , I have at least 10 times now

The book itself is a masterpiece, and the narrator too is very good.

It’s nice to be back in these worlds again but the Silmarillion is way too packed with names and relations, you can’t remember or place them. I found myself wandering off in thoughts quite often

The audio file was a bit messed up at parts (skips or repeats sections). That aside, this is a fantastic book with excellent narration. The thickness of lore reaches Lovecraftian proportions.

Overall very good. This copy has some editing errors, the odd part would repeat its self but not for very long. There was also some odd high pitched distortion in two or three places but nothing that really took away from the book.

A classic work of fantasy that every fan of Tolkien or Lord of the Rings should read. It does read like the Bible in parts, but the history and background of Middle Earth is deep and interesting. It is dense at the start but the more and more that you read the better it gets. The narrator was perfect and I have absolutely no criticism for him. 10/10

it's the best book of all time

The read has me in tears, Id be at work and have to quickly duck away so no one would see me cry over these fictional characters. Truly moving.

I am a huge fan of Tolkien but this material is just too dry for me. It is basically a history book.

This book showed me different J.R.R. Tolkien. The LOTR and The Hobbit became even more interesting after this book!

I really enjoyed this audiobook. I do recommend it.

great read. if you are a fan of Tolkien's LOTR this is for you. a deep history of middle earth and its people

Felt as if you were there, the narration really brought it to life. Enjoyed it thoroughly.

This title is due for release on October 29, 2015
We'll send you an email as soon as it is available!