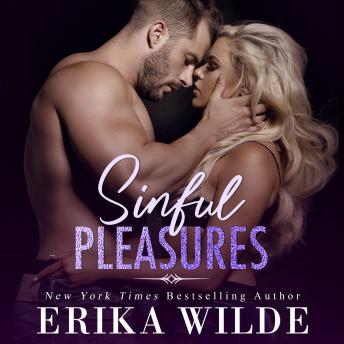 
Elaina “Elle” Darien is gorgeous and driven, but her father’s death left her dealing with a wicked stepmother intent on sabotaging the family business.  After two years of constantly working, all she wants is one night for herself, and the Wilder Way Fairy Tale Ball promises to sweep her off her feet.


After the tragic loss of his parents and fiancée, handsome and wealthy Hunter Wilder no longer believes in happily ever afters. But when he meets Elle at the ball, he’s smitten, and intrigued, for the first time in years.  Indulging in a night of sinful pleasures is heavenly, but he awakens to an empty bed. A single crystal adorned shoe is the only proof she was there.


One night wasn’t nearly enough and he’s determined to find Elle. When he discovers her dire financial situation, he wants to help. But while Elle might be a damsel in distress, she’s not looking for a prince to rescue her.


SINFUL PLEASURES is a seductive and modern take on Cinderella.