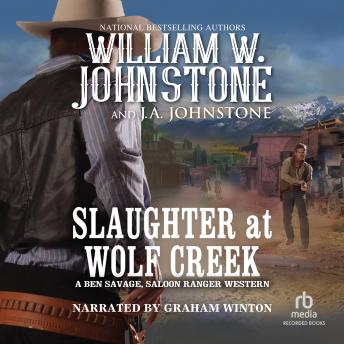 JOHNSTONE COUNTRY. ALL SHOTS ON THE HOUSE.

Running a small-town saloon is no easy task, even for a former Texas Ranger like Ben Savage. A lot of men get mean after a few shots of hooch. Some get violent.

Others get revenge—bloody, bloody revenge …

There’s a new stranger in town, and he goes by the name of Lucas Blaine. Some folks say he’s the fastest gun in the West. But Ben Savage don’t put much stock in what folks say—until the killing starts. So far, Blaine has his sights set on just one
target: a pretty widow who’s staying with the wife of a Baptist preacher. No one knows what the connection is between the two, but the local sheriff isn’t taking any chances. In the past, he’s relied on Ben Savage to help keep Wolf Creek from
becoming target practice for gunslingers. But this time, a woman is involved. And the gunslinger’s about to turn Wolf Creek into a slaughterhouse …

This title is due for release on October 25, 2022
We'll send you an email as soon as it is available!