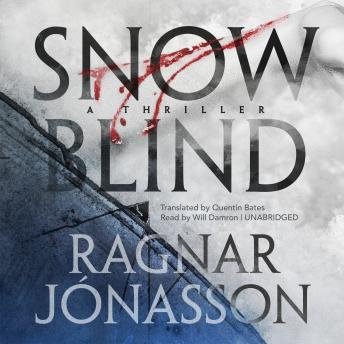 #1 of The Dark Iceland Series

Siglufjördur: an idyllically quiet fishing village in Northern Iceland where no one locks their doors—accessible only via a small mountain tunnel.

Ari Thór Arason: a rookie policeman on his first posting, far from his girlfriend in Reykjavík—with a past that he’s unable to leave behind.

When a young woman is found lying half-naked in the snow, bleeding and unconscious, and a highly esteemed, elderly writer falls to his death in the local theater, Ari is dragged straight into the heart of a community where he can trust no one and secrets and lies are a way of life.

Past plays tag with the present and the claustrophobic tension mounts as Ari is thrust ever deeper into his own darkness—blinded by snow and with a killer on the loose.

Taut and terrifying, Snowblind is a startling debut from an extraordinary new talent.

Good for newer Nordic Noir readers, but more formulaic than many of its cousins. The setting, especially the isolation of north Iceland is well done, but the characters are slightly one-note.

This title is due for release on January 31, 2017
We'll send you an email as soon as it is available!