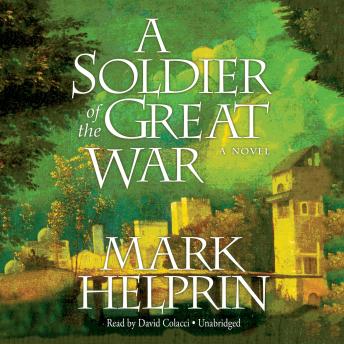 A Soldier of the Great War

From acclaimed novelist Mark Helprin comes a lush, literary epic about love, beauty, and the world at war.

Alessandro Giuliani, the young son of a prosperous Roman lawyer, enjoys an idyllic life full of privilege: he races horses across the country to the sea, he climbs mountains in the Alps, and, while a student of painting at the ancient university in Bologna, he falls in love. Then the Great War intervenes. Half a century later, in August of 1964, Alessandro, a white-haired professor, tall and proud, meets an illiterate young factory worker on the road. As they walk toward Monte Prato, a village seventy kilometers away, the old man—a soldier and a hero who became a prisoner and then a deserter, wandering in the hell that claimed Europe—tells him how he tragically lost one family and gained another. The boy, envying the richness and drama of Alessandro's experiences, realizes that this magnificent tale is not merely a story: it's a recapitulation of his life, his reckoning with mortality, and, above all, a love song for his family.

While Helprin writes beautiful descriptive passages, they really drag the story. The advantage of an audio version is that I could listen at double speed while the characters navigate a mountain climb with exact detail. (If you are an avid climber you might enjoy). As for the story, it brings the horror of fighting a war vividly to the reader.

This title is due for release on October 16, 2007
We'll send you an email as soon as it is available!