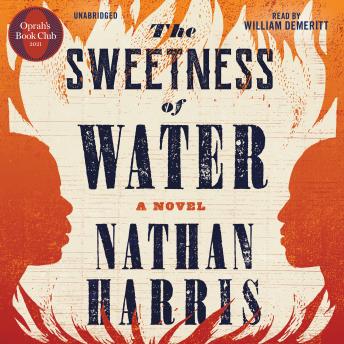 The Sweetness of Water (Oprah’s Book Club): A Novel

In the spirit of The Known World and The Underground Railroad, an award-winning “miraculous debut” (Washington Post) about the unlikely bond between two freedmen who are brothers and the Georgia farmer whose alliance will alter their lives, and his, forever

In the waning days of the Civil War, brothers Prentiss and Landry—freed by the Emancipation Proclamation—seek refuge on the homestead of George Walker and his wife, Isabelle. The Walkers, wracked by the loss of their only son to the war, hire the brothers to work their farm, hoping through an unexpected friendship to stanch their grief. Prentiss and Landry, meanwhile, plan to save money for the journey north and a chance to reunite with their mother, who was sold away when they were boys.

Parallel to their story runs a forbidden romance between two Confederate soldiers. The young men, recently returned from the war to the town of Old Ox, hold their trysts in the woods. But when their secret is discovered, the resulting chaos, including a murder, unleashes convulsive repercussions on the entire community. In the aftermath of so much turmoil, it is Isabelle who emerges as an unlikely leader, proffering a healing vision for the land and for the newly free citizens of Old Ox.

With candor and sympathy, debut novelist Nathan Harris creates an unforgettable cast of characters, depicting Georgia in the violent crucible of Reconstruction. Equal parts beauty and terror, as gripping as it is moving, The Sweetness of Water is an epic whose grandeur locates humanity and love amid the most harrowing circumstances.

One of President Obama's Favorite Books of 2021

Winner of the Ernest J. Gaines Award for Literary Excellence

Winner of the Willie Morris Award for Southern Fiction

Winner of the Writers’ League of Texas Book Award for Fiction

Longlisted for the Man Booker Prize

Shortlisted for the Dylan Thomas Prize

Longlisted for the 2022 Carnegie Medal for Excellence

Longlisted for the Center for Fiction First Novel Prize

Tried this title after listening to a LOT of crime, mystery and violent thrillers. Great narrator-wasn't it really a single narrator? and did anyone take note of him channeling John Wayne as the voice of the sheriff? The ending perhaps needed a loose end tied up?

Very well written, thought provoking book. Not a genre I would normally pick up, but very glad to have read it! Excellent narration as well.

This book was a wonderful read. The narrator made every character come to life along with the storyline kept me listening. Quite the page turner!

The narrator was fabulous as was the story

i loved the narrator. great book.

The author is very creative regarding plot, but unseasoned at developing his characters. The one character whom I felt I could actually feel something about was "George", the father, who is honest, real and believable as an actual, fully developed and rounded person. The use of modern language often spoken by the younger characters was anachronistic and did not work. The dialogue between George's son and the slave did not make sense - the slave, who was born to slaves and had worked on a farm as a slave all his life up until the time of his manumission would not have had the same vocabulary as George's son. It was because of shortcomings like this that the whole story took on a "Disney" feel for me. The narrator was very good.