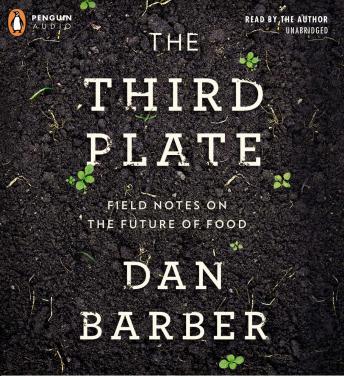 The Third Plate: Field Notes on the Future of Food

“Not since Michael Pollan has such a powerful storyteller emerged to reform American food.” —The Washington Post

Today’s optimistic farm-to-table food culture has a dark secret: the local food movement has failed to change how we eat. It has also offered a false promise for the future of food. In his visionary New York Times–bestselling book, chef Dan Barber, recently showcased on Netflix’s Chef’s Table, offers a radical new way of thinking about food that will heal the land and taste good, too. Looking to the detrimental cooking of our past, and the misguided dining of our present, Barber points to a future “third plate”: a new form of American eating where good farming and good food intersect. Barber’s The Third Plate charts a bright path forward for eaters and chefs alike, daring everyone to imagine a future for our national cuisine that is as sustainable as it is delicious.

I just finished this book. Took me about 3 weeks to finish as I let the chapters sink in after listening. I work in fitness and nutrition field so much of the book was distant to me with its roots and history and talk of chef's domains, food cultivation, food history, pioneering chef's etc. I still took away some very fascinating lessons and facts about the restaurant business, food critics, food preparation methods, food development and much much more. I a Dan Barber fan since seeing his segment on Chef's Table via Netflix. His ideas, efforts, mission, and value to food and human/environmental well-being are laudable. I was floored by the chapter on wheat and bread. My favorite chapter of the whole book. The only areas I disagree with Dan is on his concepts and suggestions for making this practical across a country and nation like the USA. Americans and the USA is not Spain, it is not Mexico. We do not have Dehesa, we do not have the same soils, temperatures, climates and animal/insect ecosystem that these overseas places do. The American palette is ever changing and drives demand for food at both grocery stores, farmers markets (which I love to attend!) and chef's menus at restaurants. I feel that farmers and chef's would need to sacrafice large incomes and revenues in the first several years of trying to adopt and adapt to a methodology and system that Dan wishes to see come to be. Unless all farmers organic and conventional, GMO and non-GMO, ALL go in together, it won't work well if at all. Those who do not would lose money, profits and their way of life in hopes that years later the rebound and see the fruits of such alteration and return to more archaic methods of farming and producing foods. None the less, this book is one of the best books I have read on agro-biz, farming, culinary integration, restaurant evolution, consumer consumption and American food history. Worth a read for those who like intellectual thought and work to see all perspectives of the worlds modern day issues.

Dan Barber is inspirational, life changing, words to abide by life. Personally I couldn’t agree more with his opinions about the future of great food could come from.

This title is due for release on May 20, 2014
We'll send you an email as soon as it is available!