This Is Ear Hustle: Unflinching Stories of Everyday Prison Life 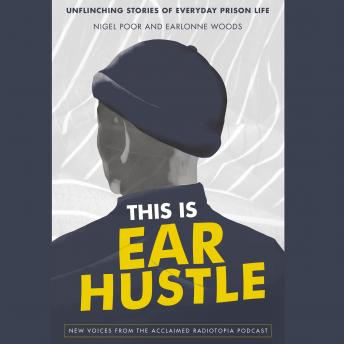 An illuminating view of prison life, as told by currently and formerly incarcerated people, from the co-creators and co-hosts of the Peabody- and Pulitzer-nominated podcast Ear Hustle

“A must-read for fans of the legendary podcast and all those who seek to understand crime, punishment, and mass incarceration in America.”—Piper Kerman, author of Orange Is the New Black

When Nigel Poor and Earlonne Woods met, Nigel was a photography professor volunteering with the Prison University Project and Earlonne was serving thirty-one years to life at California’s San Quentin State Prison. Initially drawn to each other by their shared interest in storytelling, neither had podcast production experience when they decided to enter Radiotopia’s contest for new shows . . . and won. Using the prize for seed money, Nigel and Earlonne launched Ear Hustle, named after the prison term for “eavesdropping.” It was the first podcast created and produced entirely within prison and would go on to be heard millions of times worldwide, garner Peabody and Pulitzer award nominations, and help earn Earlonne his freedom when his sentence was commuted in 2018.

In This Is Ear Hustle, Nigel and Earlonne share their own stories of how they came to San Quentin, how they created their phenomenally popular podcast amid extreme limitations, and what has kept them collaborating season after season. They present new stories, all with the same insight, balance, and rapport that distinguish the podcast. In an era when more than two million people are incarcerated across the United States—a number that grows by 600,000 annually—Nigel and Earlonne explore the full and often surprising realities of prison life. With characteristic candor and humor, their moving portrayals include unexpected moments of self-discovery, unlikely alliances, inspirational resilience, and ingenious work-arounds.

One personal narrative at a time, framed by Nigel’s and Earlonne’s distinct perspectives, This Is Ear Hustle reveals the complexity of life for incarcerated and formerly incarcerated people while illuminating the shared experiences of humanity that unite us all.

This Is Ear Hustle: Unflinching Stories of Everyday Prison Life