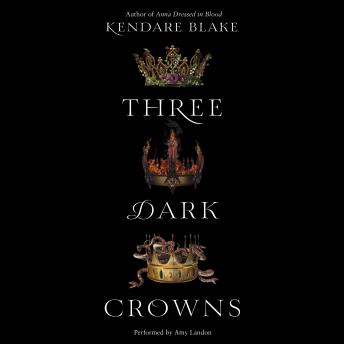 Fans of acclaimed author Kendare Blake’s Anna Dressed in Blood will devour Three Dark Crowns, the first book in a dark and inventive fantasy series about three sisters who must fight to the death to become queen.

In every generation on the island of Fennbirn, a set of triplets is born: three queens, all equal heirs to the crown and each possessor of a coveted magic. Mirabella is a fierce elemental, able to spark hungry flames or vicious storms at the snap of her fingers. Katharine is a poisoner, one who can ingest the deadliest poisons without so much as a stomachache. Arsinoe, a naturalist, is said to have the ability to bloom the reddest rose and control the fiercest of lions.

But becoming the Queen Crowned isn’t solely a matter of royal birth. Each sister has to fight for it. And it’s not just a game of win or lose…it’s life or death. The night the sisters turn sixteen, the battle begins. The last queen standing gets the crown.

This series is fabulous! I highly recommend it! Great Story idea and really reminds me of The Mists of Avalon while maininting it's own story arc!

Could have been better

It was a little slow getting into the meat of the story but overall it’s very interesting. I could use a little more “colorful” descriptions and character building but overall I really liked the book