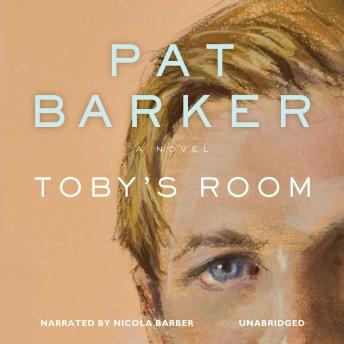 Toby's Room opens in the July of 1917, three years after the events of Life Class. Elinor Brooke is still painting, but her brother Toby is shipping out to the front as a Medical Officer, a fact that she cannot bring herself to accept. Toby finds himself on the same Channel crossing as Kit Neville, a close friend-and aspiring suitor-of Elinor's from before the war. Intent on cementing his reputation as an artist, Kit never intended to serve overseas. Conscripted nonetheless, he becomes a stretcher-bearer assigned to assist Toby. It's exhausting, dangerous work, and Kit resents Toby's frequent decisions to risk their own lives in attempting to save the wounded. Confronted daily by their mortality, both men find solace in sexual exploits, but Toby pushes the envelope further by seeking out men, risking a great deal in the process. When Kit sees Toby having sex with another soldier in the ruins of Ypres, he tells the chaplain. Two days later, Toby goes missing presumed dead during a bombardment as he runs to the aid of a soldier. News of her missing brother destroys the indifference Elinor has cultivated for so long. She tracks down Kit, who is by now wounded and back in London, but she doesn't believe his version of events. That Kit is cracking up doesn't help; he is soon transferred to a convalescent home where he goes spectacularly mad. Elinor instead turns to her German friend Catherine for comfort, even as Catherine struggles to cope with her own burdens, not least her nationality. Pat Barker is one of Britain's very finest novelists, and in Toby's Room she once again demonstrates her ability to eloquently convey simple, moving truths. A multi-layered exploration of identity, Toby's Room develops the already empathetic and engaging characters of Life Class, exploring at all levels-and across all divides-what it means to be human.