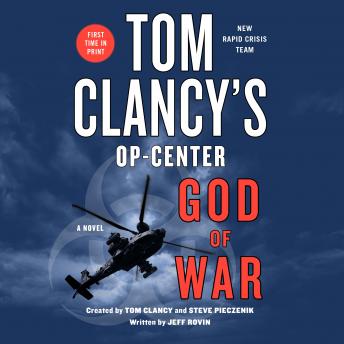 In Jeff Rovin's Tom Clancy's Op-Center: God of War, after the devastating outbreak of a killer super virus, the Black Wasp Team must prevent America's enemies from gaining access to the most dangerous weapon the world has ever seen.

The passengers and crew on an Airbus en route to Australia suddenly begin coughing up blood and hemorrhaging violently as the plane plunges to the ground. There are no survivors.

A luxury yacht in the South Indian Sea blows up, and a lone woman escapes the contagion that has inexplicably killed everyone else on the boat.

A helicopter whose occupants have been stricken by an unknown illness crashes into a bridge in South Africa, killing motorists and pedestrians.

The world is facing a devastating bio-terror event, and a game of brinksmanship gets underway as the major powers jockey for position: China sends a naval flotilla to seek the source of the plague and find a way to weaponize it, while Russia maneuvers quietly on the sidelines to seize the deadly prize in its quest to regain an empire. Back in Washington D.C., Chase Williams and his top-secret Black Wasp special ops team must find out who is behind these deadly attacks before war is unleashed—and millions of innocent lives are lost.

Worst book ,that had Tom Clancy name on the cover,I know Clancy had nothing to do with this, love all Tom Clancy books , could not finish , and the download sucked.

Love Tom Clancy this book was boring as hell