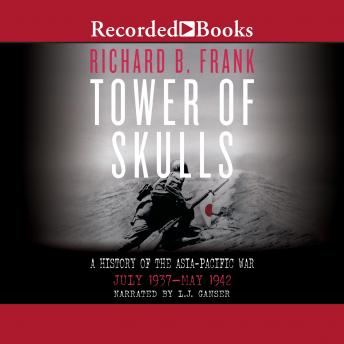 An eye-opening, pathbreaking account of the onset of the Asia-Pacific War, by the acclaimed author of Downfall and Guadalcanal.

In 1937, the swath of the globe east from India to the Pacific Ocean enclosed half the world’s population, all save
a fraction enduring under some form of colonialism. Japan’s onslaught into China that year unleashed a tidal wave of
events that fundamentally transformed this region and killed about twenty-five million people. From just two nation
states with real sovereignty, Thailand and Japan, and two with compromised sovereignty, China and Mongolia, the
region today encompasses at least nineteen major sovereign nations. This extraordinary World War II narrative vividly
describes the battles across this entire region and links those struggles on many levels with their profound twenty-firstcentury legacies.

Beginning with China’s long-neglected years of heroic, costly resistance, Tower of Skulls explodes outward to
campaigns including Singapore, the Philippines, the Netherlands East Indies, India, and Burma, as well as across the
Pacific to Pearl Harbor. These pages cast penetrating light on how struggles in Europe and Asia merged into a tightly
entwined global war. They feature not just battles, but also the sweeping political, economic, and social effects of the
war, and are graced with a rich tapestry of individual characters from top-tier political and military figures down to
ordinary servicemen, as well as the accounts of civilians of all races and ages.

In this first volume of a trilogy, award-winning historian Richard B. Frank draws on rich archival research and
recently discovered documentary evidence to tell an epic story that gave birth to the world we live in now.

A lot of good information and very detailed. If you are a WWII history buff you will like this. Can't wait to get the next volume.