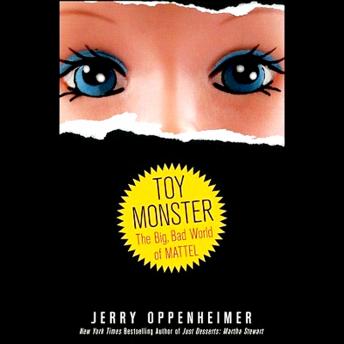 From Boise to Beijing, Mattels toys dominate the universe. Its no-fun-and-games marketing muscle reaches some 140 countries, and its iconic productsBarbie, Hot Wheels, and Chatty Cathy, to name a fewhave been a part of our culture for generations. Now, in this intriguing and entertaining expose, New York Times bestselling author Jerry Oppenheimer places the worlds largest toy company under a journalistic microscope, uncovering the dark side of toy land, and exploring Mattels oddball corporate culture and eccentric, often bizarre, cast of characters. Based on exclusive interviews and an exhaustive review of public and private records, Toy Monster exposes Mattels take-no-prisoners, shark-infested corporate style. Throughout this scrupulously reported, unauthorized portrait, youll discover how dangerous toys are actually nothing new to Mattel, and why its fearsomely litigious approach within the brutal toy business has helped their products dominate over potential rivals such as Bratz. But this is only part of the story. Along the way, youll also become familiar with the larger-than-life personalities that have shaped Mattels eccentric world. Theres cofounder Ruth Handler, a one-woman sales-merchandising-promotion-administrative force, a sort of industrial Orson Welles, who becomes a white-collar criminal. Theres Jack Ryan, the Father of Barbie, whose second of five wives calls him a full-blown seventies-style swinger into wife-swapping and sundry sexual pursuits as a way of life. And dont forget CEO Robert Eckert, who came from the worlds of processed cheese and hot dogs to lead Mattelonly to get grilled by the U.S. Congress, and the world press, in the lead-paint-and-dangerous-magnets cause celebre. The phenomenal Barbie brands 50th anniversary arrives in 2009, hot on the heels of the China Toy Terror recall scandal that has tarnished Mattels image in the hearts and minds of millions of people worldwide. Toy Monster takes you inside the scandals that have been a part of this company, and shows you why todays toy business isnt always fun and games.