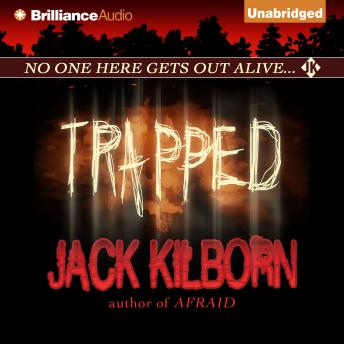 It was supposed to be a harmless camping trip. Six wayward teenagers who'd run into trouble with the law, and their court-appointed guardians, Sara and Martin Randhurst. Three nights on a small, deserted island off of Michigan's upper peninsula. A time to bond, to learn, to heal.

Then Martin told a campfire story about the island's history. Of the old civil war prison hidden in there, and the starving confederate soldiers who resorted to cannibalism to stay alive. Everyone thought it was funny. They even laughed when Martin pretended to be dragged off into the woods.

But Martin didn't come back. And neither did Sara when she went in search of him.

Then the laughter stopped.

The group soon began to realize that this deserted island wasn't so deserted after all. And perhaps Martin's ridiculous story had more truth to it than anyone thought.

What's the most horrifying thing you can imagine?

This is a hundred times worse...

TRAPPED by Jack Kilborn
It starts where other horror ends

A Word of Warning

This is the long-awaited follow-up to AFRAID, one of the most horrifying books ever written.

Originally scheduled to be released in paperback in 2010, the publisher read the first version of the manuscript and refused to release it. The author made extensive changes, rewriting much of the story. The publisher still refused.

This is a disturbing, terrifying book. You may think you're brave enough to handle it. But you're probably not...

This is the first thing I have read by this author so I’m not sure about his other books or how he wrote their styles but all I see that he was going for in this one was shock value plain and simple. The story, although somewhat original, was not that good. Over the top cannibalism is the main theme and the author milks that for all its worth by turning the gore up to 11 with over the top descriptions and detail of everything from torture to cooking a teen alive. Nothing appears off limits to the author which could have worked if it had not been so outlandish that the reader just begins to expect what would be inconceivable thus making this book somewhat predictable. Although the narrator is a bit overdramatic at times boarding on annoying, his take on the villains really saves this listening experience for me as well as the strong female protagonist keeps the story kinda going but overall this book was a bust for me.

I want to listen to more of Jack’s books read Phil!! They are fun, thrilling and exciting!