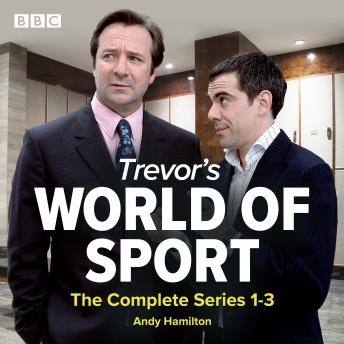 One of the main movers and shakers at TS Sports Stars agency, Trevor Heslop is honest, decent and sensitive. Unfortunately, he works in a world of cut-throats and corruption, with nightmare clients and a rapacious partner with the morals of a barracuda. Add to that his dysfunctional family – estranged wife Meryl and teenage son Toby – and it’s a miracle he manages to stay afloat in the shark tank that is his life.

In these eighteen episodes, he grapples with a Buddhist (and a specially trained bear), tackles a footballer who’s just issued his seventeenth public apology, ends up in court as a witness while trying hard not to lie and proposes taking on the firm’s first Muslim client – but do his colleagues think this is a good idea? As he copes with the ultimate client from hell, Ralph, struggles to keep his dignity and his staff, and tries to save his reputation from being destroyed by a ruthless tennis star, can Trevor retain his decency in an increasingly indecent world?