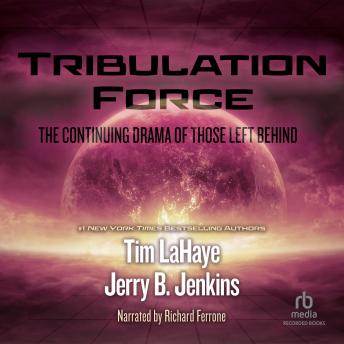 Tribulation Force: The Continuing Drama of Those Left Behind

Left Behind thrilled millions of readers with its apocalyptic visions and fast-paced suspense. Now Tribulation Force joins it in the stunning continuation of a prophetic battle against the enemies of God. In an instant, millions of people have vanished from Earth. Those left behind scramble to find the cause of this massive disappearance. In their desperation, they fall under the spell of Nicolae Carpathia, a charismatic leader, who vows to bring all religions, governments, and economic systems together. But underneath his promise to unite the world lurks a force of great evil. Can a group of four men and women, who call themselves Tribulation Force, find the strength to topple this wicked foe? As they draw on their shared faith in Christ, the challenge becomes one that could alter the fate of all humankind. Narrator Richard Ferrone conveys the spiritual and physical conflicts, sweeping you into a world teetering on the brink of destruction.

I love the Left Behind series!

Great listen it had me wanting more, I didn't want the book to end. Narrator Richard Ferrone didn't superb job in making this book come to life.

The story picks up 2 weeks after book 1 ends. The characters are defined even more and the story begins to truly unfold. Anyone who knows the book of Revelation can start to feel the anxiety of what is yet to come. If you don't know what I'm taking about, I highly recommend reading the last, but the most revealing, book in the bible. This series is about to get dark as the story progresses through the seven years of tribulation. I'm excited to move forward.

It was a good story and it has no. Swarming or. Dirty. Talk. That is. Good.I. Enjoyed it very mush

This title is due for release on December 11, 2003
We'll send you an email as soon as it is available!