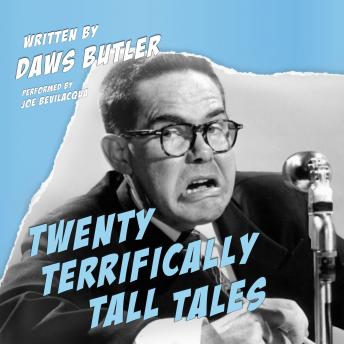 This audio collection of wildly whimsical works was written by legendary cartoon voice magician Daws Butler (Yogi Bear) and voiced entirely by Daws Butler protege Joe Bev.
Butler wrote the scenes for his acting sensitivity workshop, which spawned such talent as Nancy Cartwright (Bart Simpson), Corey Burton (Disney), and Joe Bev.
'This was the most difficult audiobook I have ever created,' admits Bev, who trained under his mentor's tutelage and calls Butler, a truly original writer-a cross between James Thurber and Dr. Seuss.
'Daws makes you work! I'm playing all the parts and trying to sound natural while doing a different voice and body placement for each-even the women-and trying to be as live as possible with few retakes.'
Tales include:
Margery DickersonMy Brunch with AGodot Not Home RevisitedSomewhere Along the LineBlur BlurThe FleaRelatingCocktail PartyThe Muffin ManTable TalkWordsUrsula Popped the QuestionItalian RestaurantWho's Afraid of a Virginian's Wrath?Goldilocks and the Three Berry BearsRavishing, Isn't It - Or Is It?Mary Had a Lachrymose LambDon't Ever Knock PunctualityThe Lil Bitty BitJack Robinson at Your Service