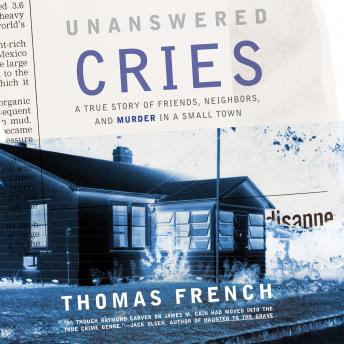 Unanswered Cries: A True Story of Friends, Neighbors, and Murder in a Small Town

The fatal nightOn a warm Florida evening, Karen Gregory saw a familiar face at her door. What the beautiful young woman could not know was that she was staring into the eyes of her killer—a savage monster who would rape her, stab her to death, and leave her battered body on the floor outside the bedroom.The desperate searchDetectives frantically sifting through the evidence were tormented by one disturbing question after another: What did the strangely worded note from a friend mean? Why was the house so orderly, when it had been the scene of a frenzied struggle? Why were the bloody footprints on the carpet barefoot? What happened to the white lace teddy missing from Karen’s drawer?The shattering discoveryPolice detective Larry Tosi stayed up nights watching the video of the grisly crime scene, looking for the one telltale clue that would lead him to Karen’s killer—until slowly, and with growing horror, he realized that the maniac he was hunting was someone he knew...someone he called a friend.

Excellent book. Narrator was one of the best I’ve had listening on here yet.

Good narrating. The book keeps you interested in every little detail. Jen H.

Well written. Held my interest. Was a little disappointed with the ending. Would like to have out a little more

Very well written account of a shocking, senseless crime and the way violence shatters the lives of everyone it touches. Written by a local reporter who covered the case from the start, this is a thoroughly developed story. Some people did not like the courtroom, jury and legal details, but I thought the author presented them in a fascinating and very human way.

Too much small court detail, it goes on and on. If you're into every detail of court procedure then you may like it.

Excellent book. Narrator was one of the best I’ve had listening on here yet.