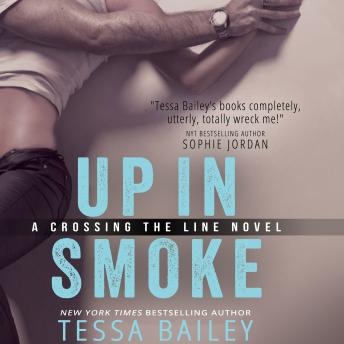 Connor Bannon is supposed to be dead. Dishonorably discharged from the Navy SEALs, he's spent the last two years working as a street enforcer in Brooklyn for his cousin's crime ring. Through a twist of fate, he's now in Chicago, working undercover to bust criminals. But when a cute little arsonist joins the team—all combat boots, tiny jean shorts, and hot-pink hair—Connor's notorious iron control slips.Erin 'she's getting away' O'Dea knows two things. She hates authority. And... Nope, that's it. When she's forced to operate on the 'right' side of the law, her fear of being confined and controlled blazes to the surface. The last thing she expects is a control freak like Connor to soothe her when she needs it most. Worse, something behind the sexy ex-soldier's eyes ignites a dangerous inferno of desire. One that invites Erin to play with fire. And one that could get them both killed...Each book in the Crossing the Lines series is a standalone, full-length story that can be enjoyed out of order.Series Order:
Prequel Novella: His Risk to Take
Book .5: Riskier Business
Book 1: Risking it All
Book 2: Up In Smoke
Book 3: Boiling Point
Book 4: Raw Redemption