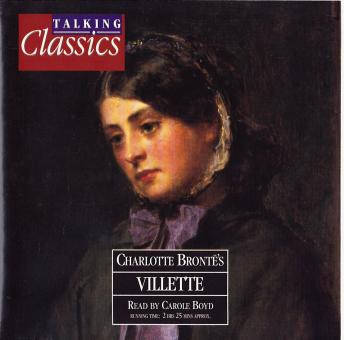 The story of Villette is told in flashback by Lucy Snowe, who tells of the trials of her young self first in England, and then in Belgium. Charlotte Bronte does not paint a romantic picture of an unsupported woman's life ? her heroine has to endure straitened circumstances, insecurity and humiliation. However, despite everything that happens to her, Lucy is a warm and courageous character who makes the most of the opportunities that occur.

The love and fulfilment which are readily available to her younger, prettier and richer charges are not quite outside her reach, but it is clear to the reader that for her to achieve them cannot be easy. 1. A Lonely Observer - A tiny visitor - Attachments formed. Lucy Snowe, a young orphan, is spending some time at the home of her godmother, Mrs Bretton, when a little girl unexpectedly arrives. Paulina Mary Home ? or 'Polly' ? has just lost her mother and is waiting for her father to take her to the Continent. The child's sadness abates when Mrs Bretton's 16-year-old son John 'Graham' Bretton arrives. He fondly teases Polly, and when word comes that her father is to take her away, she is desolate and wonders if she will ever see Graham again. 2. Into the Unknown - No turning back - An unexpected friendship. Lucy returns home to her relations. During the following eight years, she loses contact with the Brettons who have lost their money and moved away. Lucy, forced to make her own way in the world, travels to London. Then, feeling that she has nothing to lose, she boldly books a passage to Boue-marine in the kingdom of Labassecour. On board ship, Lucy meets the headstrong yet charming Ginevra Fanshawe who is on her way back to Madame Beck's school in Villette. Ginevra tells Lucy about a vacancy at the school and suggests she apply. After a troubled night, Lucy sets off for Villette. 3. Sanctuary - Gainfully employed - A happy reunion. Arriving in the town of Villette late in the evening, Lucy presents herself to Madame Beck, explaining that she is in great need of work. Monsieur Paul, Madame Beck's cousin and a teacher at the school, approves her appointment At first, Lucy is engaged as a nursery governess, but when the English teacher fails to turn up for his classes, she is given his position instead. Meanwhile, Ginevra Fanshawe confides in Lucy that she has a suitor, but she does not wish to marry him because she is too young, when the school is stricken with illness, the doctor is called. Lucy is stunned when the physician turns out to be Graham Bretton, who is also Ginevra's suitor. He takes Lucy to convalesce with his mother at their house in the country. 4. Among Friends - Confidantes once more - A sparkling occasion. Mrs Bretton and Lucy happily catch up on old times. Graham soon confides his feelings for Ginevra and his doubts about his ability to win her favours. He takes little notice of Lucy's attempts to reassure him on the matter. Her godmother decides that Lucy should have a new dress, and invites her to a concert at which she can wear it. The glamorous event is attended by a number of Madame Beck's pupils, as well as members of the royal family. 5. Change of Heart - A lover betrayed - Picnic at the theatre. During the concert, Graham Bretton's eyes remain on Ginevra. She, however, is interested in die Count de Hamal. This upsets Dr Bretton, to the extent that his feelings for her are irrevocably altered. Lucy returns to school, .and is pleasantly surprised when Graham soon arrives to take her to the theatre. Suddenly, the smell of smoke brings panic. Graham calmly rescues a young girl from the ensuing stampede. He takes her back to her hotel and tends to her injured shoulder. 6. Humiliation - A painful understanding. Ginevra Fanshawe scornfully tells Lucy that she has seen a Miss Paulina de Bassompierre ? her cousin ? with Graham and Mrs Bretton. To her shock, Lucy discovers that this person is the young girl Graham rescued ? and the little Polly who stayed with Mrs Bretton long ago. On Monsieur Paul's birthday, when the girls give him flowers, Lucy is unaware of the custom. Berated by Madame Beck and humiliated by Monsieur Paul in front of the school, she cannot bring herself to go forward and give him the shell-box she has made instead. Later, she finds him putting some books in her desk as a gift and her anger melts. 7. Love Stories - Friends again - True character revealed. Monsieur Paul asks Lucy why she ignored the school's custom, but when she presents him with the shell-box, he is greatly moved. Graham and Paulina marry, to Lucy's joy. Soon after, Lucy is asked to deliver a birthday gift to the ungrateful Madame Walravens. At her home, she meets an old priest who tells Lucy the story of one of his pupils whose fiancée, Justine Marie, died. This pupil now financially supports the priest and Madame Walravens, the grandmother of the dead girl. Lucy is shaken to hear that this benefactor is Monsieur Paul. Further shocks ensue when Ginevra elopes with the Count de Hamal. 8. Dreams Come True - Love at last - The future planned. Madame Beck breaks the startling news that Monsieur Paul is to go abroad.

Lucy is distraught and realizes her true feelings. She recalls how she had confided her dreams to him. When Monsieur Paul comes to say goodbye, Madame Beck blocks their meeting. However, he leaves Lucy a note saying they will meet and after an unbearable delay, Monsieur Paul comes to see her. He takes Lucy to a pretty building, which has her name on it. She is to be the proprietress of a school ? and when he returns from his travels they will begin a life together.