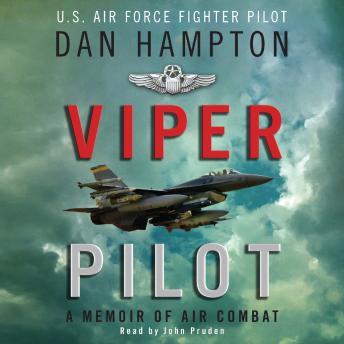 Viper Pilot: The Autobiography of One of America's Most Decorated Combat Pilots

Action-packed and breathtakingly authentic, Viper Pilot is the electrifying memoir of one of the most decorated F-16 pilots in American history: U.S. Air Force Lieutenant Colonel Dan Hampton, who served for twenty years, flying missions in the Iraq War, the Kosovo conflict, and the first Gulf War. Both a rare look into the elite world of fighter pilots and a thrilling first-person account of contemporary air combat, Viper Pilot soars—a true story of courage, skill, and commitment that will thrill U.S. Special Forces buffs, aviation and military history aficionados, and fans of the novels of Tom Clancy and Dale Brown.

excellent storyline but narrator didn't put much enthusiasm into the story

Our nation and our individual citizens own an indescribable debt to our fighting pilots. They put everything on the line every time they suit up and hurtle done the runway; why? Because they love our country with a passion to be admired by all. I salute them and thank God for their dedication.

Great story. If you are not military or have military experience, Dan Hampton did a fine job of helping you understand the military jargon yet keeping the story very interesting.