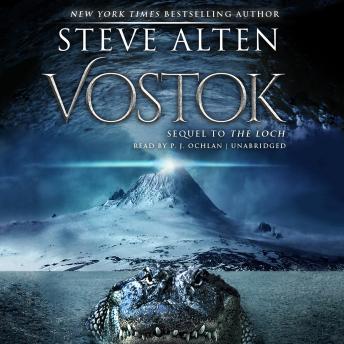 #2 of The Loch Series

East Antarctica: the coldest, most desolate location on earth. Two-and-a-half miles below the ice cap is Vostok, a six-thousand square mile liquid lake, over a thousand feet deep, left untouched for more than fifteen million years.

Now, marine biologist Zachary Wallace and two other scientists aboard a submersible tethered to a laser will journey thirteen thousand feet beneath the ice into this unexplored realm to discover Mesozoic life-forms long believed extinct—and an object of immense power responsible for the evolution of modern man.

In this sequel to The Loch and prequel to Meg: Nightstalkers, New York Times bestselling author Steve Alten offers readers a crossover novel that features characters from two of his most popular series.

I am a huge fan of Steve Alten, and discovering The Loch actually had a significant impact on my personal and professional life. It opened up a whole new genre for me, which lead me to actually meeting and befriending several authors in the genre, which then even led me to become a professional narrator. So yeah, I owe that fabulous book a tremendous debt. Unfortunately, the sequel is a tremendous letdown. There are elements of it that I enjoyed, mostly from the first third, but overall it is disappointing. I have also listened to Undisclosed, a story that centers on the UFO and alien phenomenas, and that was significantly influenced by Alten’s relationship with Dr. Steven Greer. That story is great, so it isn’t the alien element of this book that turned me off. Rather, it is the alien connection, coupled with the multiverse fragmented storylines, totally straying from the monster element I desired, that ruined it. Essentially, this story was something of a bait-and-switch. It baited me with the monster, sold me with the returning characters, then became something entirely different. On a positive note, PJ Ochlan did a fine job of narrating. At times I thought it was a bit too slow, the pace slightly impacting intonation, but the accents were fabulous! Totally believable, not at all forced. He did a great job with The Loch as well.

This book is good until around the halfway point and then it falls apart at around the halfway point. I loved the Meg series as well as The Loch. So I figured this would be a perfect blend of the two. Boy was I wrong. It evolves into something about aliens and multiverses and all around just gets ridiculous. The gentleman who reads the book does his best but many of the voices (Jonah, in particular) are flat out awful and completely distracting. You work hard for your money, don't waste it on bad books like this one. Heed my warning, this book is not good , and this is coming from a legitimate fan of the author.