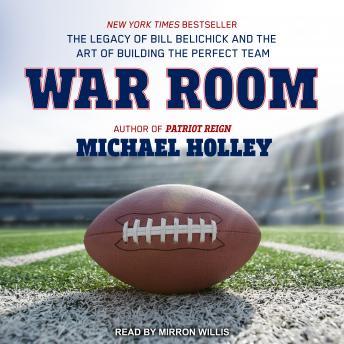 War Room: The Legacy of Bill Belichick and the Art of Building the Perfect Team

Bill Belichick is one of the titans of today's game of football. Now, sports commentator and bestselling author Michael Holley follows three NFL teams-the New England Patriots, Kansas City Chiefs, and Atlanta Falcons-from training camp 2010 through the Super Bowl and into the April draft, opening a new window into Belichick's influence on the game. This one-of-a-kind exploration takes football fans behind the scenes of the most popular sport in America, with unprecedented insider access to the head coaches, scouts, trainers, and players who make the game what it is-including new insights from Bill Parcells, Todd and Dick Haley, and Belichick himself. For true fans of the game, and for readers of Badasses, Patriot Reign, and Boys Will Be Boys, Holley's War Room is not to be missed.

The narrator sounds like a robot reading the book to you. I think it took away a lot of the message that a reader is seeking out when listening to this audio.