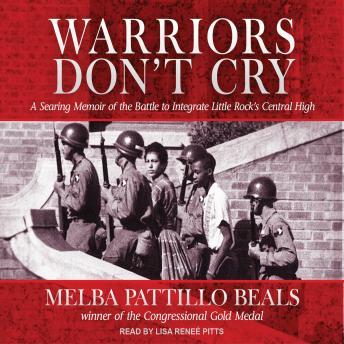 The landmark 1954 Supreme Court ruling, Brown v. Board of Education, brought the promise of integration to Little Rock, Arkansas, but it was hard-won for the nine black teenagers chosen to integrate Central High School in 1957. They ran a gauntlet flanked by a rampaging mob and a heavily armed Arkansas National Guard-opposition so intense that soldiers from the elite 101st Airborne Division were called in to restore order. For Melba Beals and her eight friends those steps marked their transformation into reluctant warriors-on a battlefield that helped shape the civil rights movement.Warriors Don't Cry, drawn from Melba Beals's personal diaries, is a riveting true account of her junior year at Central High-one filled with telephone threats, brigades of attacking mothers, rogue police, fireball and acid-throwing attacks, economic blackmail, and, finally, a price upon Melba's head. With the help of her English-teacher mother; her eight fellow warriors; and her gun-toting, Bible-and-Shakespeare-loving grandmother, Melba survived. And, incredibly, from a year that would hold no sweet-sixteen parties or school plays, Melba Beals emerged with indestructible faith, courage, strength, and hope.

My Grandchildren and I listened to this together. I wanted them to know what it was like for their people and what was sacrificed for them to be able to attend school.

Excellent book. Learned a lot how the nine were tormented at Central High School. When the righteous do nothing, and allow evil to prevail people suffer severely. If you find yourself in a situation concerning injustice, do the right thing and stand up and speak out for justice. This is how wrongs are changed. The cost may be high, but this is the assignment that God has given you.

What a great book. So sad what people go through to have equal rights. Thank you for sharing your story ♥️

The author reminds us of the harsh reality of the segregated 1950s. She and her friends at Central endured horrible treatment. Grandmother portrayed as strong woman, always rising above the brutal racial discrimination.

This is a must read for American history. It tells a story from a perspective that most of us can't even imagine.

Without wanting to be disrespectful the day by day relating of the bullying and the physical/mental harm she was subjected to got a bit repetitive and may have been better summarised - I'm sure it could have been done without losing any of its impact. As an eye witness account of a shameful part of history, it is very valuable. Loved her Grandma.

I absolutely loved this book. I had so many emotions listening as the narrator took me on a sea of adventures. Reading about the Little Rock Nine was nothing in comparison of living out each day, minute and second with the author.

as a parent this broke my heart and at times brought me to tears. as a human it is unbelievable situations like have ever or could ever be. a story of tremendous strength, courage and reliance on the face of fear and threat of loss of life by 9 teenagers.

This title is due for release on November 14, 2011
We'll send you an email as soon as it is available!