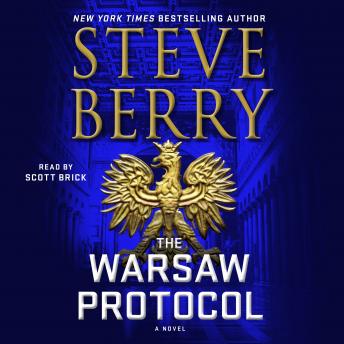 The Warsaw Protocol: A Novel

Critically-acclaimed and award-winning narrator Scott Brick returns to his role as Cotton Malone — eponymous hero of Berry's iconic New York Times bestselling series — as the seven precious relics of the Arma Christi, the weapons of Christ, disappear one by one from sanctuaries across the world.

After former Justice Department agent Cotton Malone witnesses the theft of one of them, he learns from his old boss, Stephanie Nelle, that a private auction is about to be held where incriminating information on the president of Poland will be offered to the highest bidder—blackmail that both the United States and Russia want, but for vastly different reasons.

The price of admission to that auction is one of the relics, so Malone is first sent to a castle in Poland to steal the Holy Lance, a thousand-year-old spear sacred to not only Christians but to the Polish people, and then on to the auction itself. But nothing goes as planned and Malone is thrust into a bloody battle between three nations over information that, if exposed, could change the balance of power in Europe.

From the tranquil canals of Bruges, to the elegant rooms of Wawel Castle, to deep beneath the earth into an ancient Polish salt mine, Malone is caught in the middle of a deadly war—the outcome of which turns on a secret known as the Warsaw Protocol.

'Brick is a masterful narrator, raising the tension in the action scenes while keeping the listener engaged in the slower historical segments.' - AudioFile Magazine on The Malta Exchange

'Narrator Scott Brick's smooth voice flows with the twists and turns of Berry's political thriller...Secrets unravel, and tensions rise as Brick shifts vocal focus from the historical secret society to contemporary conspirators who include corrupt politicians and judges.' — AudioFile Magazine on The Lost Order

The Warsaw Protocol is the 15th entry in author Steve Berry’s long running, wildly popular Cotton Malone series. Malone is a former Justice Department agent with a knack for finding international trouble. He still has contacts in the agency and does free-lance work and you never know where a job will take him. Intrigue, danger, non-stop action, foreign agents, conspiracies, politics, history, a little bit of romance – what more could you want? Cotton is likeable, capable and always surrounded by a rich cast of characters. You can read the series in order but you can always just drop in for a book or two. You’ll be glad you did. Thanks to Criminal Element and audiobooks.com for providing an audio version of The Warsaw Protocol for my listening pleasure. I thoroughly enjoyed it, highly recommend it, and all opinions are my own.

Love this book and series.