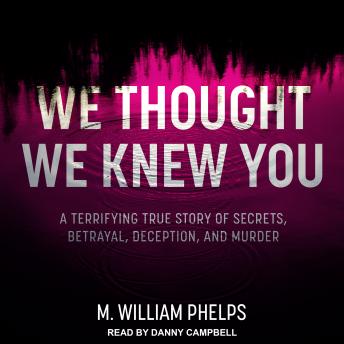 We Thought We Knew You: A Terrifying True Story of Secrets, Betrayal, Deception, and Murder

In July 2015, Mary Yoder returned home from the chiropractic center that she operated with her husband, Bill, complaining that she felt unwell. Mary, health-conscious and vibrant, was suddenly vomiting, sweating, and weak. Doctors in the ER and ICU were baffled as to the cause of her rapidly progressing illness. Her loved ones-including Bill and their children, Adam, Tamryn, and Liana-gathered in shock to say goodbye.

In the weeks that followed Mary's death, the grief-stricken family received startling news from the medical examiner: Mary had been deliberately poisoned with colchicine. Another bombshell followed when the local sheriff's office received a claim that Adam Yoder had poisoned his mother. But Adam was not the only person of interest in the case.

Pretty and popular Kaitlyn Conley, Adam's ex-girlfriend, worked at the Yoders' clinic. She'd even been at Mary's bedside during those last terrible hours. Still, some spoke of her talent for manipulation and a history of bizarre, rage-fueled behavior against anyone who dared to reject her. Had Kaitlyn and Adam conspired to kill Mary Yoder, or was the killer someone else entirely?

We Thought We Knew You: A Terrifying True Story of Secrets, Betrayal, Deception, and Murder