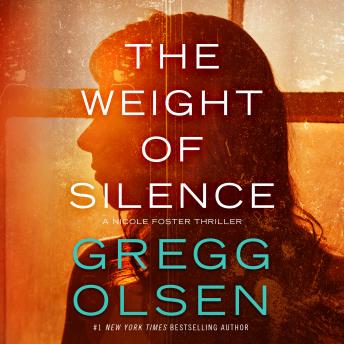 The Weight of Silence

A heart-pounding novel of unspeakable crimes and unforgivable sins from the #1 New York Times bestselling author of The Sound of Rain.

Homicide detective Nicole Foster has finally balanced an unsteady life and is anxious for a second chance. There’s no better place to start over than at the beginning—back at her childhood home on the Washington coast, where’s she raising her niece and keeping an eye on her increasingly fragile father. But Nicole’s past is never truly behind her—not when a disturbing new case stirs dark memories of the haunting investigation that shattered her career.

In the middle of the hottest August in a century, a toddler is found dead inside a parked car. Her father says he forgot her. It’s an unthinkable crime. And for Nicole, it’s made all the more unbearable by her own suffocating secrets—those shared by an old rival who has reappeared from the shadows and is pushing Nicole to the edge once again.

Now, wherever the truth lies, solving this case and avenging an unforgivable death is the most important move in Nicole’s career. But to see it through to the end, how far is she willing to go? And what is she prepared to risk this time?