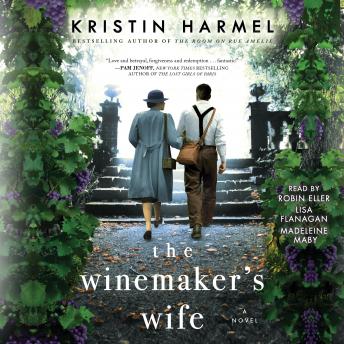 “Love and betrayal, forgiveness and redemption combine in a heady tale of the ever present past” (Pam Jenoff, New York Times bestselling author) set amid the champagne vineyards of northern France during the darkest days of World War II. Perfect for fans of Kristin Hannah’s The Nightingale and Julia Kelly’s The Light Over London.

Champagne, 1940: Inès has just married Michel, the owner of storied champagne house Maison Chauveau, when the Germans invade. As the danger mounts, Michel turns his back on his marriage to begin hiding munitions for the Résistance. Inès fears they’ll be exposed, but for Céline, half-Jewish wife of Chauveau’s chef de cave, the risk is even greater—rumors abound of Jews being shipped east to an unspeakable fate.

When Céline recklessly follows her heart in a desperate bid for happiness, and Inès makes a dangerous mistake with a Nazi collaborator, they risk the lives of those they love—and the champagne house that ties them together.

New York, 2019: Liv Kent has just lost everything when her eccentric French grandmother shows up unannounced, insisting on a trip to France. But the older woman has an ulterior motive—and a tragic, decades-old story to share. When past and present finally collide, Liv finds herself on a road to salvation that leads right to the caves of the Maison Chauveau.

A spellbinding and exceptional tale of love, courage, and betrayal, “once you start reading this moving novel, you will not be able to put it down until you reach the last page” (Armando Lucas Correa, author of The German Girl).

I liked one of the narrators. The other one was kind of robotic in the way she read. It was hard for me because I found myself thinking one of the characters wasn’t very intelligent due to the way the voice came across. This is not accurate so it was distracting for me and took away from my enjoyment of the book a little bit

Loved this book!!!! Enjoyed the readers’ accents, but their tone put me to sleep a few times

This book captured my attention from the start. Moving story that touched me deeply. I have read several of the author’s books and I am never disappointed.

A beautiful story of historical fiction. Combining champagne production, war and a love triangle. My only issue was with the reader for the part of Celine. Their performance was not at the same level as the other two readers.

Liked the story. I did not like the narrator taking a deeper voice to sound like a man or an old person.