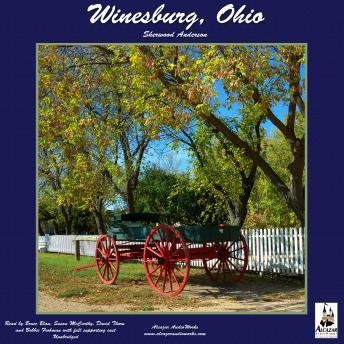 Sherwood Anderson writes almost as if he were eavesdropping on the private domestic lives of a small Ohio town's inhabitants in the early 1900's. The central figure, George Willard, is a young budding journalist working for the local paper who allows the listener in on the latest gossip being circulated in this casual study of the insular Midwest, when America was still growing up.

This timeless collection charted a new stylistic path for modern fiction. Through twenty-two connected short stories, Sherwood Anderson looks into the lives of the inhabitants of a small town in the American heartland. These psychological portraits of the sensitive and imaginative of Winesburg's population are seen through the eyes of a young reporter-narrator, George Willard. Their stories are about loneliness and alienation, passion and virginity, wealth and poverty, thrift and profligacy, carelessness and abandon. With its simple and intense style, Winesburg, Ohio evokes the quiet moments of epiphany in the lives of ordinary men and women.

AUTHOR
Sherwood Anderson (1876-1941) was born in Camden, Ohio. Largely self-educated, he worked at various trades while writing fiction in his spare time. For several years he worked as a copywriter in Chicago where he became part of the Chicago literary renaissance. As an author, he strongly influenced American short-story writing, and his best-known book, Winesburg, Ohio (1919), brought him recognition as a leader in the revolt against established literary traditions.

In the early 1900s, a young reporter sets out to record the stories of the lives within Winesburg Ohio. Quite unusual and candid, the stories told by some of the older people date back all the way to the Civil War.

Town gossip, suspicion, and intrigue are the lifeblood of Winesburg Ohio; it flows from the townsfolk to the reporter to the listener's ear. To the outside, it seems a simple town, but listeners will be surprised and maybe even shocked by what really happens here.

Each story is about something gone terribly wrong, something that author Sherwood Anderson called, ""The Grotesques."" Each is quite unique and the contents won't be revealed by the titles: Tales and the Persons, Hands, Paper Pills, Mother, Dr. Parcival, Nobody Knows, Godliness, A Man of Ideas, Adventure, Respectability, The Thinker, Tandy, The Strength of God, The Teacher, Loneliness, An Awakening, Queer, The Untold Lie, Drink, Death, Sophistication, and Departure. All of the short stories in the town collection are contained on a seven-CD set.

Sherwood Anderson grew up in a small town in Ohio and graduated MFA from Ohio State University. His most popular book is celebrated each year at the Sherwood Anderson Festival.
Reviewed By: Kate O'Mara - EHO Eclectic Homeschool Online

Quotes about Winesburg, Ohio
Library Journal praised this edition of Sherwood Anderson's famed short stories as ""the finest edition of this seminal work available."" Reconstructed to be as close to the original text as possible, Winesburg, Ohio depicts the strange, secret lives of the inhabitants of a small town. In ""Hands,"" Wing Biddlebaum tries to hide the tale of his banishment from a Pennsylvania town, a tale represented by his hands. In ""Adventure,"" lonely Alice Hindman impulsively walks naked into the night rain. Threaded through the stories is the viewpoint of George Willard, the young newspaper reporter who, like his creator, stands witness to the dark and despairing dealings of a community of isolated people. -Amazon.com Review

""When he calls himself a 'poor scribbler' don't believe him. He is not a poor scribbler . . . he is a very great writer.""-Ernest Hemingway

""Winesburg, Ohio is an extraordinarily good book. But it is not fiction. It is poetry."" -Rebecca West

"Considered to be one of the forerunners of modern fiction...[A] ground-breaking masterpiece."-Midwest Book Review

"Nothing quite like it has ever been done in America. It is so vivid, so full of insight, so shiningly lifelike and glowing, that the book is lifted into a category all its own."-H. L. Mencken

"As a rule, first books show more bravado than anything else, unless it be tediousness. But there is neither of these qualities in Winesburg, Ohio...These people live and breathe: they are beautiful."-E. M. Forster

"Winesburg, Ohio, when it first appeared, kept me up a whole night in a steady crescendo of emotion."-Hart Crane

"[A] timeless book of connected short stories about the brave, cowardly, and altogether realistic inhabitants of an imaginary American town."-AudioFile
"

This title is due for release on January 1, 2005
We'll send you an email as soon as it is available!