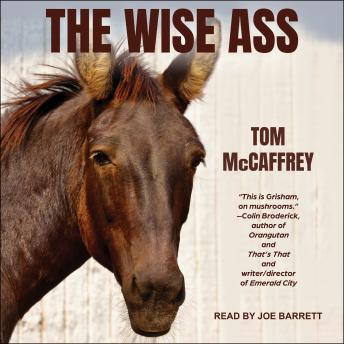 'Witty, gritty, and full of heart.'-Nick Atlas, author of The Light Travelers

After his brothers are murdered, a New York mob lawyer testifies against his associates and is forced to enter WITSEC (the Witness Protection Program). He and his wife are relocated to a rural area outside a small town in Colorado where he is compelled to adapt to his new life under the constant threat of mafia reprisal. Reflexively resisting his immersion into all things country, this life long city boy meets and adopts a loquacious mule and befriends his closest neighbors, who have even greater secrets to conceal.

A renegade US Marshall, a lesbian couple that includes a powerful psychic-medium-witch and an ex-army ranger complete his new circle of friends. When the mob associates are released due to the lawyer's intentionally prejudicial testimony at trial, they come gunning for him before the retrial can occur.

When Wise Guys meet the Wise Ass and friends, all hell breaks loose.