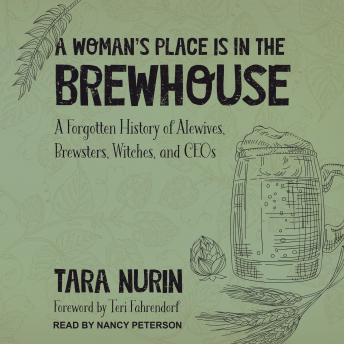 A Woman's Place Is in the Brewhouse: A Forgotten History of Alewives, Brewsters, Witches, and CEOs

It's women, not men, who've brewed beer throughout most of human history. Their role as family and village brewer lasted for hundreds of thousands of years-through the earliest days of Mesopotamian civilization, the reign of Cleopatra, the witch trials of Medieval and Renaissance Europe, and the settling of colonial America. A Woman's Place Is in the Brewhouse celebrates the contributions of female brewers and explores the forces that have erased them from the brewing world.

It's a history that's simultaneously inspiring and demeaning. Wherever and whenever the cottage brewing industry has grown profitable, politics, religion, and capitalism have grown greedy. Men have repeatedly seized control and forced women out of the business. Other times, women have simply lost the minimal independence, respect, and economic power brewing brought them.

But there are more breweries now than at any time in American history and today women serve as founder, CEO, or head brewer at more than one thousand of them.

As women continue to work hard for equal treatment and recognition in the industry, author Tara Nurin shows that women have been-and are once again becoming-relevant in the brewing world.

Woman's Place Is in the Brewhouse: A Forgotten History of Alewives, Brewsters, Witches, and CEOs