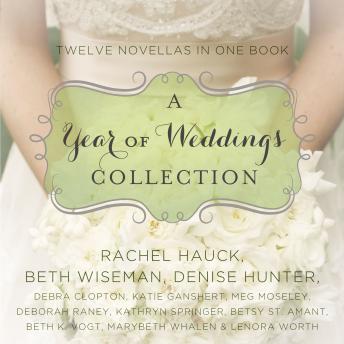 Happily ever after begins today. The honor of your presence is requested at a year of weddings . . .

Madeleine Houser’s pen-pal friendship with a lonely widower has taken an unexpected turn.

Allie left the love of her life at the altar—to save him from her family curse.

Susanna found her prince, and happily ever after is just around the corner. But first, they must pass one final test.

Weeks away from the wedding, Stella and Marshall must choose between faith in their past love or a very different future than either imagined.

Ellie has prepared for her wedding all her life . . . but she's forgotten the most important part.

The reality show ended with an engagement, so why doesn’t this feel like the fairy tale Wynne thought it would be?

In a moment of total panic, Brendan left Alyssa at the altar. What will it take for him to win her back?

As far as Kelsey Wilcox is concerned, her last cowboy was the last cowboy.

Annie is ready to call this new town home, but one handsome policeman is ready to stand in her way . . . even if it means walking her down the aisle.

What if the only way to make your father’s last wish come true . . . was to marry the man of your dreams?

Can a decades-long friendship marred by romantic missteps ever lead to happily ever after for Sadie and Erik?

What started as a whim turned into an accidental—and very public—engagement in Chapel Springs this holiday season.