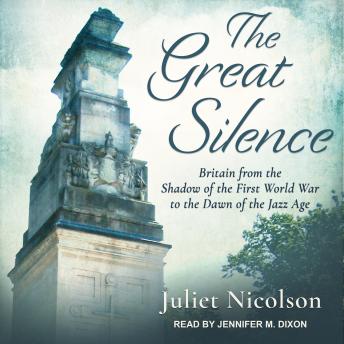 The Great Silence: Britain from the Shadow of the First World War to the Dawn of the Jazz Age

As the euphoria of Armistice Day in 1918 quickly subsided, there was no denying the carnage that the Great War had left in its wake. Grief and shock overwhelmed the psyche of the British people-but from their despair, new life would slowly emerge.

For veterans with faces demolished in the trenches, surgeon Harold Gillies brings hope with his miraculous skin-grafting procedure. Women win the vote, skirt hems leap, and Brits forget their troubles at packed dance halls. And two years later, the remains of a nameless combatant would be laid to rest in the Tomb of the Unknown Soldier at Westminster Abbey, as 'The Great Silence,' observed in memory of the countless dead, halted citizens in silent reverence.

This history of two transformative years in the life of a nation features countless characters, from an aging butler to a pair of newlyweds, from the Prince of Wales to T. E. Lawrence, the real-life Lawrence of Arabia. The Great Silence depicts a nation fighting the forces that threaten to tear it apart and discovering the common bonds that hold it together.